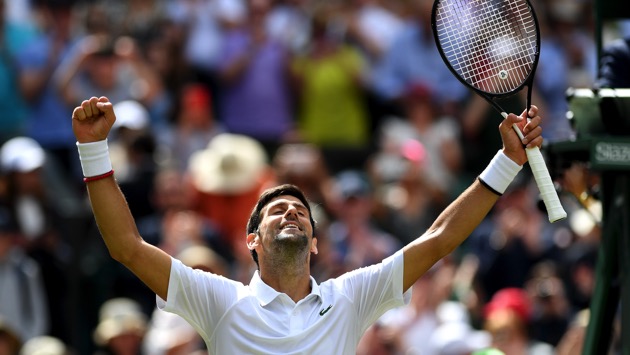 (LONDON) — There were no first round jitters Monday at the All England Lawn Tennis and Croquet Club for defending Wimbledon champion Novak Djokovic. The previous year’s champ traditionally opens the Wimbledon action on center court, which can undoubtedly add to a player’s nervousness. But Djokovic took the challenge in stride, launching tournament play against Philipp Kohlschreiber Monday and beating the 35-year-old German in straight sets 6-3, 7-5, 6-3.After the match, Djokovic, 32, spoke about his nerves going into the first round.”I’m a human being as anybody else, you know, I do feel nerves and at the same time I had a great quality tennis player across the net who is very dangerous. I lost to him earlier this year,” he said.The two-week tournament will also see the return of Andy Murray — back this time in Men’s Doubles play, following a serious hip problem. Roger Federer and Rafael Nadal are set up for a potential semi-final confrontation, while Serena Williams is placed in what is said to be the toughest quarter of the Women’s field.Live daily coverage of The Championships – Wimbledon begins at 6 a.m. ET on ESPN. Click here to view the ESPN Wimbledon scoreboard.Copyright © 2019, ABC Radio. All rights reserved.