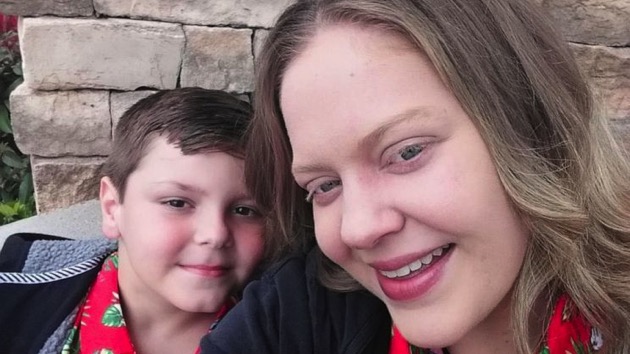 (NEW YORK) — A mother took to Facebook to publicly thank a stranger for putting her mind at ease during her son’s first solo airplane ride.Alexa Bjornson of Las Vegas, Nevada, told Good Morning America her son Landon was traveling on June 27 to Portland, Oregon, to see his father. The 7-year-old makes the trip once a year, Bjornson said, but this was Landon’s first time flying alone.Landon has high-functioning autism and Bjornson wanted to ensure he’d have an enjoyable flight.”When you have autism you can feel when someone is irritated with you,” Bjornson explained. “My goal was to make sure he felt comfortable with whomever was sitting around him so he could talk and be himself.”Bjornson decided to write a letter to the person who would wind up sitting next to Landon, in hopes that person would show him kindness.She wrote, “He might ask you, ‘Are we there yet?’ a few times or get a little loud with his headphones on. If you could please find it in your heart to make him feel comfortable and safe, I would be forever grateful!”Bjornson also included a $10 gift and her cell phone number at the bottom of the note.Within 20 minutes of Landon’s plane landing, Bjornson received a text from a man named Ben Pedraza.”I was Landon’s seat neighbor for his flight to Portland,” Pedraza wrote to Bjornson, along with a selfie of himself posing with Landon. “He did ask if we were there yet several times but he was a great travel buddy. He’s a great kid and you’re a lucky mom.”Pedraza also wrote in the letter that he donated the $10 to Autism-Society.org in honor of Landon.Bjornson shared the letter on Facebook with her friends and family. The public post was quickly shared 134,000 times.”I was relieved that I had picture-proof that my son had a good flight, he was comfortable and safe and felt like he could be himself,” Bjornson said. “Then, I felt humbled that he donated that money and let me know Landon was no burden to him once so ever.””There are good humans on the planet that make him feel like it’s OK to be himself and not make him feel like an annoyance,” she added.Bjornson said Landon and his dad hope to meet up with Pedraza and his family for lunch while in Oregon.Copyright © 2019, ABC Radio. All rights reserved.