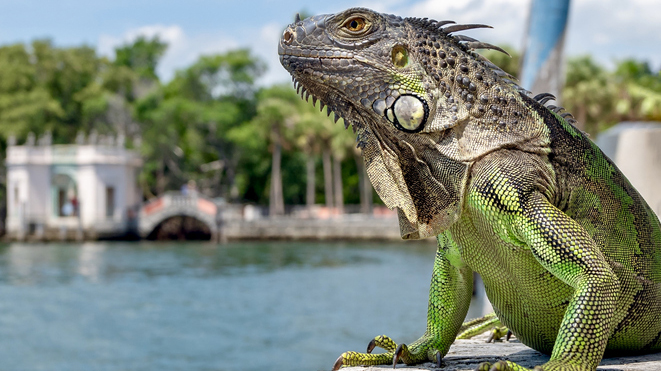 (MIAMI) — The green iguana population in Florida is exploding — and consistent warm weather is only exacerbating the problem.It has gotten so bad, in a post to its website, the Florida Fish & Wildlife Conservation Commission is urging residents to “kill green iguanas on their own property whenever possible.””This is a serious problem from many standpoints,” Joseph Wasilewski, part of a group of scientists at the University of Florida who study wildlife in Florida and the Caribbean, told ABC News. “They will destroy agriculture, undermine roads, cause electrical transformers to fail, they can transmit salmonella and can be a FAA safety hazard.”Miami-Dade Zoological Park and Gardens’ Zoologist Rob Magill told ABC News, “Iguanas have proliferated with such intensity in Southern Florida that they are now a common sight from the suburbs into the city.”The numbers back up Magill’s assertion. More than 3,000 green iguanas have been spotted in Southeast Florida alone since the Center for Invasive Species at the University of Georgia started tracking sightings in 2005.According to the Florida Fish & Wildlife Conservation Commission, iguanas can lay up to 76 eggs per year, and grow to more than five feet in length.Since iguanas are cold blooded, extended warm spells — like Florida has been seeing — allow them to thrive. A cold streak in 2009 made a significant dent in the population, but with rising temperatures, it’s not clear how much Florida can rely on cold weather to help curb the population.According to the National Weather Service climate data, temperatures have only dropped below 50 degrees in Miami once in the last 18 months.Some worry what this means for the future, as Wasilewski said, “As the climate changes, even slightly, they can be established into Florida counties beyond their present distribution.””Unfortunately, short of removing all vegetation and any water features, iguanas are here to stay and we are going to have to learn to live with them,” Magill said.For some, this is a business opportunity. Iguana Control has been helping homeowners and businesses deal with iguanas for a decade.Owner Tom Portuallo told ABC News this is his company’s “most active season in 10 years,” and it has 15 people working every day with hundreds of homeowners associations to help remove iguanas.”It’s endless what these things can do,” Portuallo said.Iguana Control sometimes removes up to 20 iguanas on a single property, according to Portuallo.Magill suggested an alternative way of dealing with the population surge: eating them.”In Central America, iguana is considered a delicacy and there are actually farms that raise them for meat. If that sentiment could take hold here, the desire for cheap and tasty protein could play a significant role in controlling their numbers,” Magill said.Wasilewski understands why iguanas must be killed, but as someone who has studied iguanas for 40 years, he says it is bittersweet: “It saddens me that all of these magnificent animals, along with multitudes of other invasive reptile species have to be put down. There is no alternative for the problems.”Copyright © 2019, ABC Radio. All rights reserved.