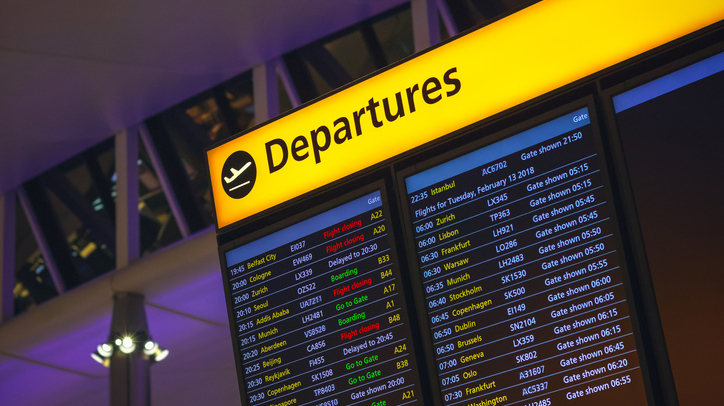 (NEWARK, N.J.) — A couple in Raleigh, North Carolina, are breathing a sigh of relief — and still awaiting answers from two airlines — after their 14-year-old son was accidentally placed on the wrong flight to a different country following a layover at Newark Liberty International Airport this weekend.Bound for Stockholm, Sweden, Christer and Brenda Bergs’ son Anton had traveled from Raleigh, North Carolina, to Newark, New Jersey, on Sunday, via United Airlines.The Bergs said that they’d paid a fee to United to have Anton supervised as an unaccompanied minor during his travels from Raleigh to Newark.At Newark, a United representative escorting the teen brought him from Terminal C to a gate in Terminal B, where a Scandinavian flight to Stockholm originally had been scheduled to depart.That Scandinavian flight, however, had been moved to another gate, unbeknownst to the representative, and the teen was placed on the plane occupying that gate: a Eurowings bound for Dusseldorf, Germany.The Bergs said that when Anton got on the plane, he texted them, remarking that a lot of passengers were speaking German on the flight. That’s when he realized he’d been placed on the wrong plane and alerted the crew.”They simply failed to double and cross-reference his documents with who they perceived he was,” Christer Berg told ABC News on Tuesday. “The wrong kid, at the wrong gate, with the wrong airline.”The Eurowings plane had pushed back for departure, but shortly after the error was realized and the plane returned to the gate, according to United.Meanwhile, Brenda Berg took to her Twitter page, tagging both United Airlines and Scandinavian Airlines, making both companies aware that her son Anton Berg had been wrongfully placed on a plane bound for Dusseldorf, Germany, and not Stockholm, Sweden, his scheduled destination.The Eurowings plane never took off, the airline said, and the teen was removed from the plane.”Someone contact me! …. Please let us know you have this under control,” Brenda Berg tweeted. “Ironically, @United if you hadn’t accompanied him, this would never have happened. He wouldn’t have counted on you to know what you were doing. #neverunitedair.”Nearly three hours later, she tweeted that her son was being booked on a different flight and that he would have an additional seven hours of travel. Berg said that after nearly an hour, she still had not yet heard from United regarding the mishap.”Never trust @United with your children,” she tweeted.United said it had apologized to the teen’s family. In a statement, the airlines said it had been in frequent contact with the family to “confirm his safety and apologize for this issue.””The safety and well-being of all of our customers is our top priority,” the airline said.ABC News was referred to Eurowings regarding its inquiries about why the teenager had been allowed on the plane without a boarding pass and what had caused the plane to turn around.United’s staff ensured the teen boarded the correct aircraft later that evening and reached his proper destination. He was refunded the unaccompanied minor fee of $150 and that it planned to reach out to the family again.Brenda Berg updated followers on Twitter after the mishap, saying that her son was finally on a plane to Denmark and then bound for Stockholm to see his grandparents. She said that consumers needed to demand airlines “do better for young travelers.”Copyright © 2019, ABC Radio. All rights reserved.

Biden challenges UN to act together on pandemic, climate change
Line 3 pipeline resistance continues as activists ask Biden admin to shutdown project
Britney Spears makes triumphant return to Instagram, but some fans think someone else is running the account
Those suffering from sickle cell disease may finally be getting some relief as experts work on cure
Biden to focus on ‘intensive diplomacy’ at UN amid tensions with allies
Republicans dig in on debt-limit standoff despite Democratic effort to mount pressure