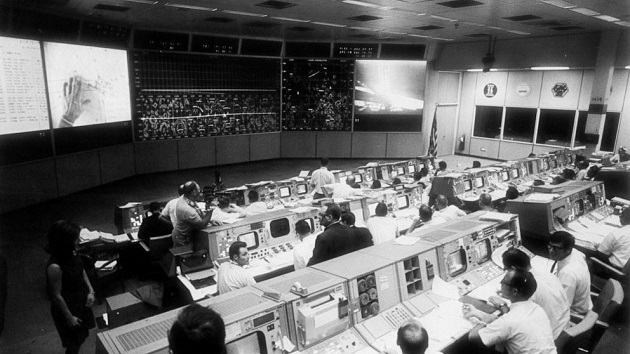 (HOUSTON) — Ahead of the 50th anniversary of the moon landing on July 20, NASA has restored the Apollo 11 mission control center to its former glory.Apollo 11 Flight Director Gene Kranz, who led the effort, recently stepped foot into the completely restored “Houston” and spoke to ABC News about what it was like to be in mission control on that historic day. Mission control housed the engineers and flight directors who worked tirelessly to ensure Apollo 11’s mission was a success. It took $5 million and a meticulous eye to bring it back to life 50 years later at NASA’s Johnson Space Center in Houston.”This room was really stirring,” Kranz said, “and the emotional intensity in this room was almost overwhelming.”The actual products engineers used in 1969 were tracked down by contractors on eBay and in antique stores: coffee, creamer, cigarettes, ash trays, pipes and even an RC Cola Can were placed in specific locations based on old photographs and film. The consoles were rebuilt entirely, and certain items were made special for the room that no longer exist today like the carpet and chair fabrics.”I really think the effort was to make it feel or make it look just the way it was, as if all the controllers just got up and went on break,” William Harris, president and CEO of Space Center Houston, told ABC News. “The goal was to have mission control look like the flight controllers just walked out of the room.”When asked if the control center looked the same as he remembered, Kranz replied, “The people that lived here and worked here, the room talks to them, and you can remember the calls that the CAPCOM made.”During the actual landing, the portion Kranz was responsible for, Neil Armstrong had to take manual control of the lunar lander with just seconds to land on the moon before they risked running out of fuel.The restored room brought back that memory vividly for Kranz.”When they were landing on the moon, I remember CAPCOM saying, ‘You got a bunch of guys about to turn blue,"” he recalled.Kranz told ABC News his proudest moment isn’t the landing itself, but the culture and frame of mind that was established in those four walls of mission control.”It’s the standard of excellence, discipline, morale, toughness, competence, commitment, teamwork,” Kranz explained. “That whenever we launch a crew, we’re going to bring them back. We lived by that mantra. Every crew we ever launched, we got home.”