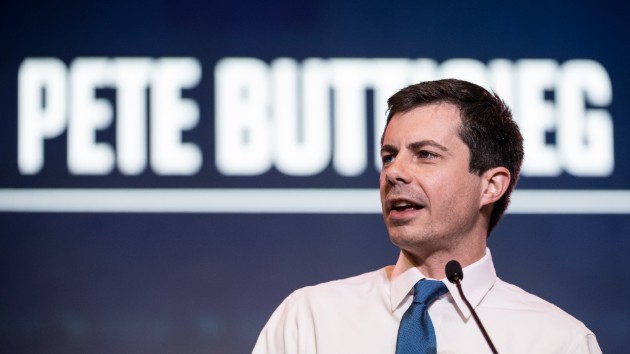 (WASHINGTON) — Largely unknown at the start of the year, Democratic presidential candidate Pete Buttigieg is now proving his power in a crowded contest, with his campaign releasing second quarter fundraising numbers showing over $24.8 million in donations. In an email to supporters, Mike Schmuhl, Buttigieg’s campaign manager, said, “Pete’s message is resonating with Americans, and it’s proof that we are building an organization that can compete.”The South Bend, Indiana, mayor’s $24.8 million figure came from 294,000 donors, bringing the average donation to $47.42, according an email from the campaign’s national press secretary Chris Meagher. He says the campaign also rolls into the third quarter of the year with $22.6 million cash on hand. In total, the campaign has received over 400,000 donations from all 57 states and territories, according to Meagher. The new amount raised is more than triple what the campaign brought in during the first quarter of 2019 and is likely to be among the largest reported by any of the Democratic candidates for the second quarter. That cycle, Buttigieg raised $7 million, with an average donation of $36.35 from 158,550 donors. Buttigieg is the first to disclose the fundraising numbers for the second quarter. Sunday, June 30, was the last day for donations to be counted in the quarter’s report. Copyright © 2019, ABC Radio. All rights reserved.

More than 600,000 flags on National Mall stand witness to America’s COVID dead
Priyanka Chopra responds to growing criticism over ‘The Activist’: “The show got it wrong”
These vaccine mandates are already in place to attend school in the US
What to expect as FDA advisory panel debates Pfizer COVID booster shots
Lawyer whose firm represented Clinton campaign indicted by special counsel investigating Russia probe
Happy Halloween! Snoop Dogg and Martha Stewart reunite to bring tasty treats with new food competition