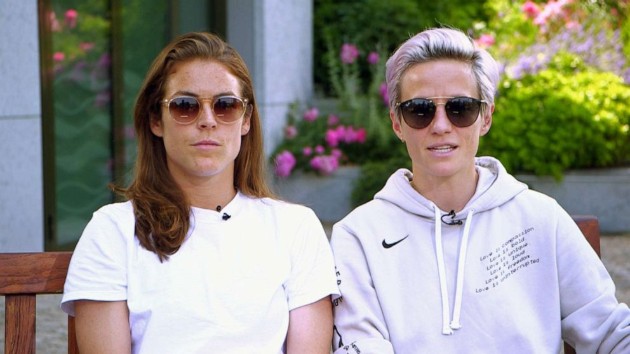 (NEW YORK) — Hot off their 2-1 victory over host nation France, U.S. Women’s National Team stars Kelly O’Hara and Megan Rapinoe called their confidence and “tactical experience” a key to the team’s success and shared a message for any fans who want to skip work to cheer them on during the semifinals. The two soccer players spoke to ABC News’ Good Morning America from Lyon, France, on Monday about the emotions and how they’ve kept distractions at bay ahead of their pivotal match against England on Tuesday.”To be honest, I think to be on this team is to understand how to deal with and withstand distraction and pressure of sort of any magnitude, whether it’s large or small,” Rapinoe said. “We’re pretty well versed in learning to deal with the problem head-on.” Rapinoe, who has notched a leading five goals in the 2019 FIFA World Cup — tied with teammate Alex Morgan — said despite outside distractions, like when President Donald Trump tweeted about the team’s performance and a potential White House visit, staying focused comes naturally. “Within the group we have a great ability to just stay together and block out those distractions when the time comes,” she said. “We’re sort of well-practiced in it — obviously this is maybe a little bit more than normal, but in the same sense, we’re in our little bubble here and have a monumental task at hand.” This is both Rapinoe and O’Hara’s third appearance in a World Cup, and they credit the team’s balance of new and old skills for the on-field success.”It is different because there’s a lot of us that have returned and have played in other World Cup’s, but there’s a lot of players on this team that are rookies and it’s their first time around and they’re stepping into big roles and filing big shoes and are doing a fantastic job,” O’Hara explained. “We still have that grittiness and that heart that this team has always had, but we’ve added a lot of technical and tactical experience, and it’s pretty cool to see it all come together on this stage.” The defending World Cup champions said they have felt support near and far and continued to encourage more from the fans ahead of the next big match. “We’re definitely feeling the love,” Rapinoe said of both friends and family cheering in person, as well as fans back in the U.S. and “the country at large” — “so keep it up, we love that.””There’s been so many fans over here it’s been awesome,” O’Hara added. “We wrote a little note to all the bosses and supervisors to ask for employees to get the [game] day] off, and I think a lot of them listened to us, so we’re excited that everyone’s been super stoked and has been getting outta work to cheer us on.” Kickoff for the semifinals is scheduled for 3 p.m. ET Tuesday in Lyon.

‘Sex and the City﻿’ star Willie Garson passes away at age 57
How Meghan Trainor avoided the biggest workplace hazard on ‘Top Chef: Family Style’
‘We grieve together,’ Pelosi says at COVID-19 flags memorial
Tobias Menzies dedicated his Emmy win for ‘The Crown’ to the late Michael K. Williams
“Something wicked this way comes”: See Denzel Washington in stark teaser for ‘The Tragedy of Macbeth’
‘Dear White People’: Justin Simien explains the purpose of ’90s music & why the series will never be “over”