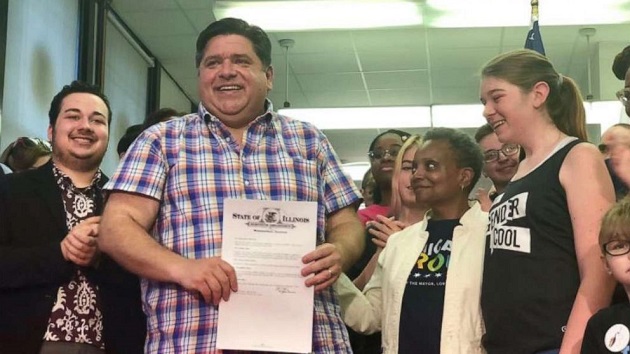 Twitter via @GovPritzker
Posted on July 1, 2019 by ABC News

(SPRINGFIELD, Ill.) — Illinois Gov. Jay Pritzker closed out Pride Month on Sunday by signing an executive order that aims to protect transgender students throughout the state. Pritzker said the order establishes a new Affirming and Inclusive Schools Task Force, and directs the state’s public school board to take “comprehensive action” to better support transgender, nonbinary and gender nonconforming students. He said the order would “disrupt the patterns of discrimination” in classrooms statewide.“We’re taking one more step toward securing Illinois’ place as a leader in equality and hope. Under this executive order, ignorance is no longer an excuse for bigotry,” Pritzker said in a tweet Sunday. “This executive order establishes the Affirming and Inclusive Schools Task Force and directs @ISBEnews take comprehensive action to ensure every LGBTQ student is supported and welcomed in their schools.”The 25-member task force will help to establish practices that promote LGBTQ students’ rights as well as educate school officials on issues specific to the transgender experience, including issues surrounding name changes, preffered pronouns and dress codes. The task force is expected to make policy recommendations to the governor’s office by Jan.1, 2020.The signing took place before Pritzker walked in the city’s annual Pride march, and as cities around the world commemorated the 50th anniversary of the Stonewall riots in New York — an event that helped spawn the modern LGBTQ civil rights movement.Pritzker said the order would help ensure safe and more inclusive spaces for all students. Lawmakers hope it also protects transgender youth, a particularly vulnerable group, amid concerning levels of anti-transgender violence.“While the LGBTQ community has so much to celebrate, we also must recognize that the trans community that ignited this movement has been left out of many of its victories,” Pritzker said in a statement Sunday. “Visibility and acceptance for non-cisgender people are on the rise, but so are attacks of hate, particularly against black trans women.”While hate-crime statistics from the FBI show violent incidents against gays and lesbians dropping slightly, or remaining stagnant, from 2013 to 2017 (the most recent year data has been released), violent incidents against transgender individuals were nearly five times higher over that period.Incidents against trans individuals also rose each year: 23 in 2013, 58 in 2014, 73 in 2015, 105 in 2016 and 106 in 2017. The statistics are self-reported by local law enforcement agencies, and are therefore incomplete.Lori Lightfoot, who made history earlier this year by becoming the city’s first openly gay mayor of Chicago, stood beside Pritzker as he signed the executive order on Sunday. She called the initiative a major part in the state’s battle against anti-transgender discrimination and violence.“It’s a first step towards codifying tolerance and respect in all of our schools across the state, giving every student the safe space to reach their full potential,” Lightfoot said a speech Sunday. “I’m proud to say that CPS, Chicago Public School, has been a leader on this front with its own guidelines for supporting transgender students and staff, ensuring that in this city trans individuals have the same access and the same opportunities as everyone else.”Copyright © 2019, ABC Radio. All rights reserved.

More than 600,000 flags on National Mall stand witness to America’s COVID dead
Priyanka Chopra responds to growing criticism over ‘The Activist’: “The show got it wrong”
These vaccine mandates are already in place to attend school in the US
What to expect as FDA advisory panel debates Pfizer COVID booster shots
Masks discussed at DASD meeting, some families angry
Happy Halloween! Snoop Dogg and Martha Stewart reunite to bring tasty treats with new food competition