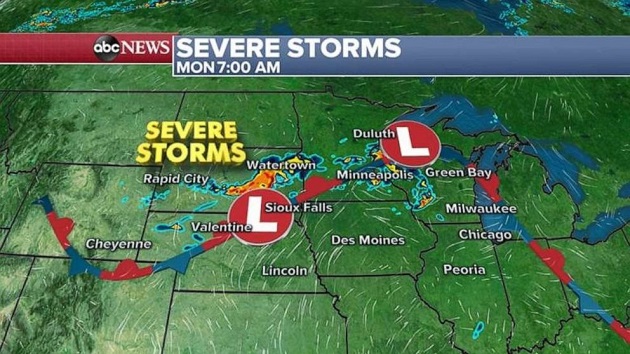 (NEW YORK) — More than 500 reports of severe weather over the weekend included three tornadoes — two in South Dakota, one in Illinois — and wind gusts of more than 75 mph in Iowa and Minnesota, which also saw baseball-sized hail. A person in Fairfield, Connecticut, died when a thunderstorm with gusts of more than 70 mph knocked a tree onto a vehicle. Strong storms dumped more than 3 inches of rain in West Virginia, which experienced flash flooding.The severe weather in the Midwest is being caused by a stationary front from Colorado to Wisconsin to Indiana. Storms were still firing along this frontal boundary Monday morning and moving slowly, meaning there’s a chance for excessive rainfall and flash flooding during the morning across Minnesota, Iowa and Wisconsin.After a brief break from the storms, they’ll likely begin firing again along this boundary later Monday afternoon and into the night, from Eastern Colorado to Wisconsin. There’s a slight risk parts of the Upper Midwest will see strong winds, large hail or brief tornadoes.South of the stationary front, summer heat lingers although it’s less severe than temperatures from the weekend. Heat Index values will be in the 90s from the Plains to parts of the Southeast, however, this warm air is only slightly above average for this time of the year for most of the region.The core of the heat will begin to become more concentrated on the Southeast and mid-Atlantic over the next few days, with the Heat Index values across parts of the Southeast on Monday possibly exceeding 105 degrees.By Wednesday, much of the Southeast and mid-Atlantic are expecting Heat Index values above 100 degrees, which by Thursday could exceed 110 degrees in some parts.Some of this heat will try to nudge northward into parts of the Northeast and southern New England, pushing temperatures into the 90s in cities including Washington and Philadelphia. New York may see highs of just below 90 degrees, preventing a second heat wave there.In the buildup to the holiday weekend, humidity will be higher than normal in the mid-Atlantic and Northeast, with the hot and steam conditions possibly leading to afternoon or evening thunderstorms.