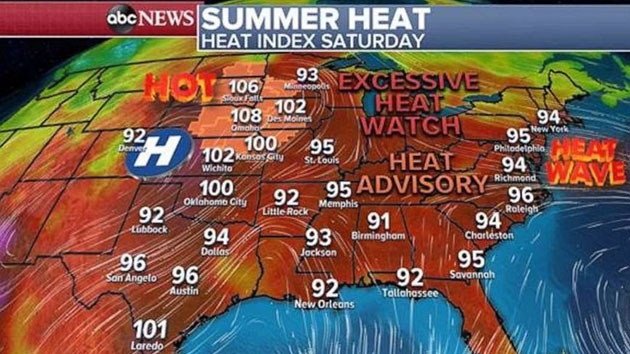 (NEW YORK) — It was another hot day across much of the U.S. on Friday, including the parts of the Northeast, where the region’s first official heat wave of 2019 was recorded.Philadelphia and New York’s LaGuardia Airport both reached 93 degrees on Friday, while Newark, New Jersey, reached 90. It was the third day in a row of 90 degrees or higher in these locations, making it an official heat wave.Meanwhile, in the Plains, temperatures were up into the upper 90s from Texas to Nebraska, including 100 degrees in Concordia, Kansas. Chicago recorded its first 90-degree day in 2019, while, at Chicago Midway International Airport, it was day three of 90-degree heat.The heat still has a grip on a large part of the nation from the southwest to the central U.S. and into the Northeast. The heat index will exceed 100 degrees from Kansas to Minnesota, where heat advisories have been issued with heat and humidity approaching dangerous levels. New excessive heat alerts are being issued for Minneapolis, as the heat index could approach 105 degrees on Sunday.The heat index will rise into the 90s across from the Carolinas and into parts of southern New York. The heat index should reach 94 or 95 degrees in Philadelphia and New York City on Saturday.In the Northeast, a storm system is approaching from the west. The trailing cold front will begin to interact with the hot and steamy air that is settled along the Interstate 95 corridor. As a result, the atmosphere will be primed for severe storm activity Saturday afternoon from Washington, D.C., to Boston, including Philadelphia and New York City.After temperatures reach the 90s early Saturday afternoon, storms will begin mid-afternoon and last into the early evening hours. It is likely that severe thunderstorms — capable of damaging winds, hail and lightning — will cover the I-95 cities later Saturday. Due to the higher levels of humidity, storms have the potential to quickly drop a lot of rain, and create localized flash flooding.Additionally, many people are seeking relief from the heat at the shore, and therefore they will need to be extra vigilant as storms develop Saturday afternoon.Behind the cold front, temperatures will drop significantly — in some cases, nearly 20 degrees. Humidity will also decrease.However, a peek ahead shows that the heat wants to return to the eastern U.S. very quickly with all indications that temperatures will be near, or into, the 90s for parts of the Northeast by the middle of the week. Additionally, there are strong signals for significant heat across the southeast U.S. heading into the Fourth of July holiday.It is becoming more likely that parts of the northeast U.S. will see a hot, steamy, sunny and stormy holiday weekend.Copyright © 2019, ABC Radio. All rights reserved.

Brian Laundrie search presses on as death of Gabby Petito ruled homicide: Live updates
Smaller COVID vaccine doses may protect children as well as full doses in adults: Pfizer
Students on cusp of COVID-19 vaccine age requirement wait patiently as 12th birthday approaches
Line 3 pipeline resistance continues as activists ask Biden admin to shutdown project
Those suffering from sickle cell disease may finally be getting some relief as experts work on cure
America Strong: Teachers across the country go above and beyond as in-person classes return