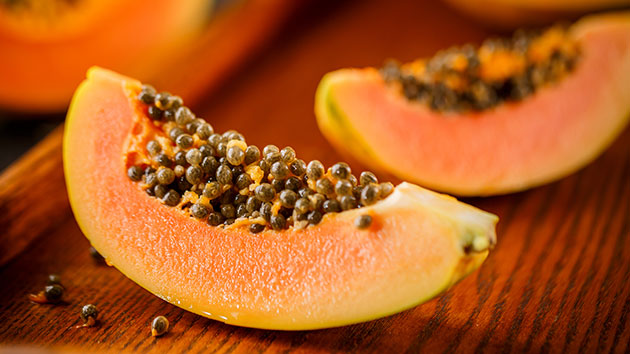 (NEW YORK) — Salmonella linked to papayas imported from Mexico have infected dozens of people in at least eight states in the last six months, according to the Centers for Disease Control and Prevention.The 62 cases stem from a strain called Salmonella Uganda, which were reported from Jan. 14 to June 8, but mostly concentrated in April, according to a statement the agency released Friday.”Whole, fresh papayas imported from Mexico and sold in Connecticut, Massachusetts, New Jersey, New York, Pennsylvania and Rhode Island are a likely source of this outbreak,” the statement read.Twenty-three people have been hospitalized, according to the CDC. No deaths have been reported.Consumers should not eat papayas or fruit salads containing papayas from Mexico, the agency advised. And if the origins are unknown, don’t eat it, it warned.In studying the path of the outbreak, the CDC discovered that two people in different homes in Connecticut reported being sick after eating papayas from the same grocery store. One Florida resident who was infected had traveled to Connecticut the week before becoming sick.The agency is still investigating an infection in Texas.Salmonella symptoms include diarrhea, fever and stomach cramps, usually within 12 to 72 hours after exposure, according to the CDC. It usually lasts four to seven days, and most people recover on their own.However, salmonella can spread from the intestines to the bloodstream and then to other places in the body, according to the CDC. As with other illnesses, children who are 5 years or younger, pregnant women, adults 65 and older, and people with weakened immune systems are more vulnerable. Copyright © 2019, ABC Radio. All rights reserved.