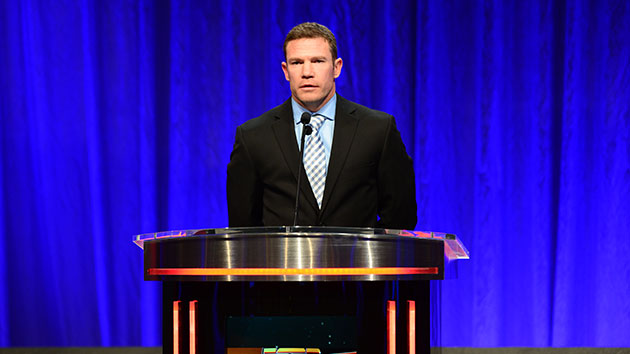 (NEW YORK) — In late May, the NFL and the league’s players’ association announced an unprecedented mental health initiative.In the joint-announcement, they required all 32 teams to keep a mental health professional on staff. They also established two committees: a comprehensive mental health and wellness committee and a joint pain management committee.The potentially transformative moves comes as teams have taken steps to address mental health more frequently in recent years. Many players even contend they have improved on the field as a result.One former NFL player who finds the same value in treating mental health: Nate Boyer, the former Green Beret who spent an off season as a part of the Seattle Seahawks franchise.”We’ve got to do a better job with uplifting those that are hurting and struggling,” says Boyer, who spoke with ABC News from the Stay in the Game Forum, organized by Beyond Sport. At the event, several professional athletes along with Boyer talked about their struggles with anxiety, depression, and other issues.Hearing Pro Football Hall of Fame safety Brian Dawkins openly discuss his battle with depression in the past is something Boyer says still inspires him and that he wanted to talk about:”Just to hear him talk about how, very vulnerably his struggles… it’s always comforting to hear that from people because in my opinion, everybody, every human being, at some level, struggles with mental health. We’re all on that spectrum in one way or another and we don’t want to feel alone… To see some people who have accomplished so much, who have had such a high level of success, admit that it wasn’t always easy and they had to battle those demons inside their head too, it’s something we all need to hear. It’s important message.”Boyer served both as an active-duty Green Beret and briefly as a member of the Seattle Seahawks in 2015. He says being vulnerable is not something that was discussed much in either setting. Rather, it was viewed as a sign of strength to work through physical and mental struggles. He was often asked, “‘Are you just hurt, or are you injured?"”Now, Boyer sees those attitudes changing:”I think the more that coaches and organizations are vulnerable themselves and have these open conversations, and it’s just seen as part of the program”Boyer believes the league’s front offices are taking mental health more seriously, and that it will take leadership from around the NFL and in other sports to change the culture. He believes coaches can be real difference-makers for players:”[It is] part of a very normal life and positive environment and any type of industry and team, and the coaches are willing to be vulnerable themselves and walk the walk with them [players], the better things are going to get.”Along with raising awareness for mental health support in sports, Boyer has also worked with veteran’s service organizations and several non-profits, including volunteer work at refugee camps in Africa.Copyright © 2019, ABC Radio. All rights reserved.