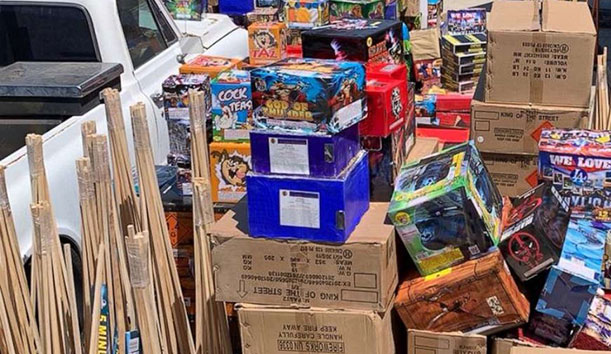 (LOS ANGELES) — Just a week before the Fourth of July, police in Southern California busted an illegal dealer with 2 1/2 tons of fireworks.The Long Beach Police Department said they seized about 5,000 pounds of illegal fireworks from someone who was planning to sell them in the region.”Know what ILLEGAL fireworks will get you? A ride to our City Jail,” the police department tweeted. They also shared a video of the truck full of the illegal explosives.The Long Beach police tweeted back on June 15 they had seized a comparatively paltry 200 pounds of fireworks, as well.All fireworks are illegal in Los Angeles County.”The County of Los Angeles Fire Code, Title 32, Section 5601.3 states that it is illegal to store, manufacture, sell, use, or handle ALL FORMS of fireworks without a valid permit in unincorporated areas of Los Angeles County,” according to the Los Angeles Fire Department.The crime is a misdemeanor, but could be punishable by up to a year in prison or a $50,000 fine if convicted, according to California law.The U.S. Consumer Product Safety Commission just held its annual fireworks safety demonstration on the National Mall in Washington on Wednesday.”Last year, there were five reports of fireworks-related deaths involving victims ranging from ages 19 to 49,” said CPSC Acting Chairman Ann Marie Buerkle on Wednesday. “All of the deaths were associated with re-loadable aerial devices, which can be either be a commercial or professional fireworks.”There were 9,100 emergency room visits in 2018 due to fireworks-related injuries, with 6,200 occurring between June 22 and July 22, according to the CPSC.Copyright © 2019, ABC Radio. All rights reserved.