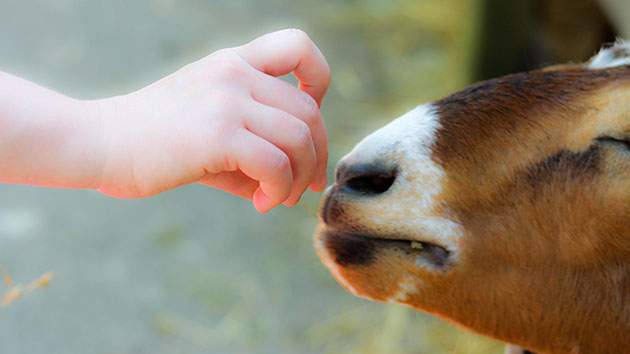 (SAN DIEGO) — A 2-year-old child has died after contracting E. coli at a petting zoo that was part of the San Diego County Fair.The young boy was one of four children who contacted E. coli from the fair, according to the County of San Diego Health and Human Services Agency.The ages of the four infected children ranged from 2 to 13 years old.Officials said they are still investigating the exact cause of the infection, but reported that all of the children had contact with animals at the fair.”Our sympathies go out to the family of the child that died from this illness,” Dr. Wilma J. Wooten, county public health officer, said in a statement. “While most people recover from this illness without complications, 5 to 10 percent of people diagnosed with STEC develop the life-threatening kidney infection.”E. coli is a bacteria found in the stomachs of people and animals, and is usually harmless, but some strains can cause diarrhea, vomiting and severe pain. Children have a greater chance of coming down with a life-threatening kidney infection and organ failure, according to the Mayo Clinic.The health department said it tested food providers at the fairgrounds and found no contamination.”Unfortunately, we’ve learned a young child, about three hours ago, passed away,” Tim Fennell, general manager of the San Diego County Fair, said at a press conference Friday. “I want to say our hearts, our prayers, our thoughts go out to the family and the friends of this young child. We’re devastated. It appears that these folks attended the fair between June 8 and June 15, and were involved with contact, possibly, with a livestock animal at the petting zoo. No contamination has to do with food service or food at all.””We are heartbroken over this incident,” he added.The petting zoo has been closed down, officials said, but the fair itself will remain open.”Safety’s all been and will continue to be our No. 1 priority here at the fair going forward,” Assistant General Manager Katie Mueller said. “We hope that people will come out to the fair and see all that we have to offer.”The fair, located at the Del Mar Fairgrounds, is open until July 4. Copyright © 2019, ABC Radio. All rights reserved.