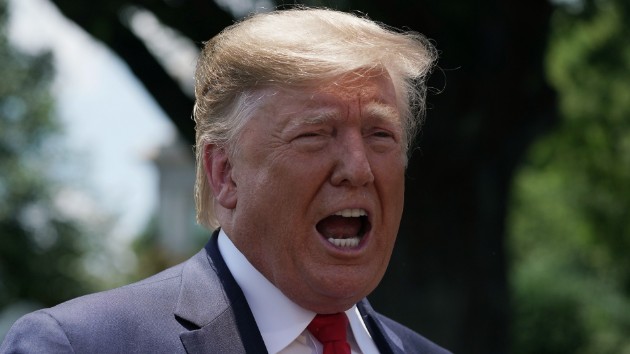 (NEW YORK) — As President Donald Trump continued to deny claims by E. Jean Carroll, a magazine columnist who accused him of sexual assault in the mid 1990s, two women have come forward to say they can confirm Carroll’s account based on what they say were separate conversations with her at the time. Audio of a New York Times interview with Carol Martin and Lisa Birnbach, friends of Carroll from the time and colleagues in the New York media landscape, ran on the newspaper’s podcast, “The Daily,” on Thursday, in which the two women recounted what they said were their interactions with Carroll in the days following the alleged sexual assault.“I remember her saying, repeatedly, ‘he pulled down my tights,” Lisa Birnbach said, recounting a phone conversation she said she had with Carroll at the time. “I said, ‘What? He raped you?’”“It was horrible,” Birnbach continued. “We fought, and I said, ‘Let’s go to the police.’ ‘No.’ ‘Come to my house.’ ‘No.’”Trump fired back at Carroll earlier this week, saying “she’s not my type” and insisting the incident “never happened.” The accusation is the latest in a string of allegations against the president dating back decades, all of which he has denied.Carroll laughed of Trump’s characterization, telling CNN’s Anderson Cooper in an interview Monday night: “I love that. I am so glad I’m not his type. I’m so glad.”Earlier in the day, the president, who also said Carroll was “totally lying” that he sexually assaulted her, had told The Hill during an interview in the Oval Office: “I’ll say it with great respect: No. 1, she’s not my type. No. 2, it never happened. It never happened, OK?”In an earlier interview on CNN, Carroll said the president’s response felt quite similar to others when confronted by other women.”He’s denied all 15 women who have come forward. He denies. He turns it around. He threatens, and he attacks,” Carroll said.Carroll’s account of the alleged incident was published on Friday by New York Magazine in an excerpt of her forthcoming book. That excerpt included a photograph from 1987 showing Trump, his then-wife Ivana, Carroll and Carroll’s then-husband, John Johnson, at a party.Trump has denied he’s ever met her.”Totally lying. I don’t know anything about her,” Trump has said. “I know nothing about this woman. I know nothing about her. She is — it’s just a terrible thing that people can make statements like that.”Trump told reporters the photo didn’t prove anything.”Standing with a coat in a line — give me a break — with my back to the camera,” he added. “I have no idea who she is.”The White House had no comment Thursday. Copyright © 2019, ABC Radio. All rights reserved.

Mom dying of ovarian cancer shares what she wants women to know about the deadly disease
House committee probing Jan. 6 attack could subpoena Trump aides: Sources
Two disbarred attorneys outside Texas sue abortion doctor under SB8
Nicole Kidman reflects on her marriage to Tom Cruise: “I was young”
‘We grieve together,’ Pelosi says at COVID-19 flags memorial
Elizabeth Holmes criminal trial dominated by allegations of deception and intimidation from those who worked for her