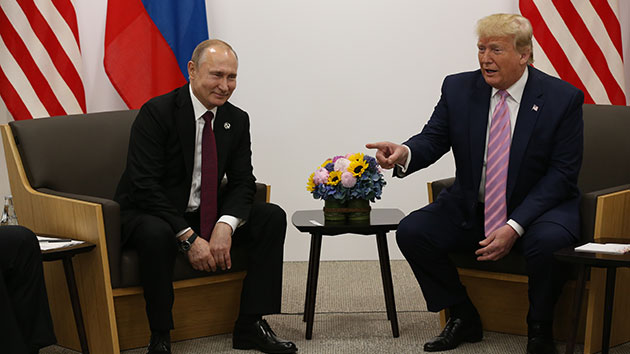 (NEW YORK) — As they met during the G-20 meeting in Japan, President Donald Trump appeared to commiserate with Russian President Vladimir Putin over their shared dislike for the news media. “Fake news,” Trump remarked to Putin, in a video posted by Ruptly, the digital arm of the Russian government-funded television network RT. “Great term, isn’t it? You don’t have that problem. We have it, you don’t.”“We also have, it’s the same,” Putin responded in English.

President Trump has long been vocal about his distaste for the news media, but Friday’s exchange with Putin was a rare look at the president of the United States disparaging reporters in the presence of the president of Russia, where violence against journalists since he first took office in 2000 has been a real problem.According to the Committee to Protect Journalists, 28 journalists have been killed in Russia between 2000 and 2019.The conversation, captured only by Russian state videographers, appeared to have occurred before the U.S. press pool camera was set up, although the official photographers for both U.S. and Russian were present at the room where the bilateral meeting was held at that time.Copyright © 2019, ABC Radio. All rights reserved.

Hostess assaulted at NYC restaurant after asking Texas patrons for proof of COVID-19 vaccination
‘We are prepared’: Law enforcement stresses readiness ahead of right-wing rally
McAuliffe, Youngkin spar over vision for commonwealth in first Va. gubernatorial debate
Statue of Bitcoin founder honors mysterious ‘god’ of cryptocurrency
COVID-19 live updates: More than 10,000 new deaths reported in US in one week
Tyra Banks defends Olivia Jade ahead of her ‘Dancing with the Stars’ debut: “Olivia is so brave”