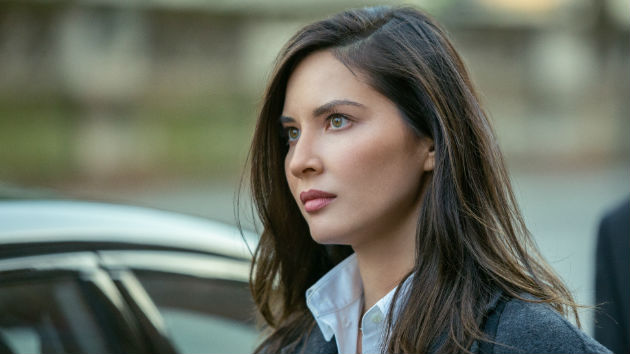 (NEW YORK) — Olivia Munn knows a thing or two about superpowers, having appeared in the X-Men franchise as Psylocke. But in Starz’s new spy thriller The Rook, she’s dealing with a whole different set of powers.

“Beginning episode, she deals with a huge heartbreak and at the same time she’s extremely strong,” Munn tells ABC Radio. “I mean, that’s actually my character’s ability is she has extreme strength but she also has just strong internal strength as well. And I loved that she had this duality that she was dealing with.”

Munn is among the show’s three female leads, along with Emma Greenwell and Joely Richardson. The show’s strong female representation is part of what drew her to the project.

“I have one rule before I take on any role which is, ‘Does she exist, if he doesn’t exist?’” she says. “That question couldn’t even be asked in this one because there was no male counterpart to my character and I loved…that I didn’t have to ask that question.”

While her character has superhuman strength, Munn reveals the “everyday” superpower she’d love to have in real life.

“I would love to be able to eat whatever I wanted and not ever have any negative repercussions from it,” she says. “I’d love to eat, like, bread and rocky road ice cream day and night and then wake up being like, ‘I look like Gisele [Bundchen] today!’”

The Rook debuts Sunday at 8 p.m. ET on Starz.

Harris interview with ‘The View’ delayed after co-hosts test positive for COVID-19
Generational wealth implications: Black and Latino-owned homes are more likely to be undervalued
Let’s-a go! Chris Pratt to voice Mario in upcoming ‘Super Mario Bros’ movie
‘The View’ hosts leave mid-show due to testing positive for COVID-19, miss Vice President Harris interview
A special Bond: Daniel Craig named honorary commander in the Royal Navy
Gabourey Sidibe shares the special connection she has to her new podcast thriller ‘If I Go Missing the Witches Did It’