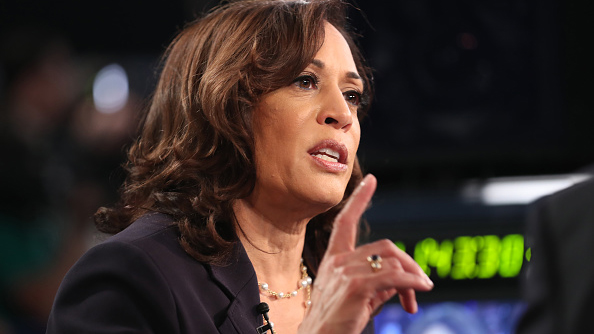 (MIAMI) — California Senator Kamala Harris took former Vice President Joe Biden to task during the Democratic presidential debate on Thursday for his opposition to busing as a means of desegregating American schools, and said that as a child in she was personally impacted by his stance.”There was a little girl in California who was part of the second class to integrate her public schools and she was bussed to school every day. That little girl was me,” Harris said.Biden has come under fire in recent days, after referencing his positive working relationship in the Senate with lawmakers he disagreed with and offering as examples senators who were staunch segregationists. Harris said that she did not believe Biden was a racist, but she joined another black candidate in the 2020 race, New Jersey Sen. Cory Booker, in calling the remarks hurtful.Harris said while her class in Berkeley, California, decided to bus students — including Harris — many others chose not to. Decades after the U.S. Supreme Court declared forced school segregation illegal, “there was a failure of states to integrate public schools in America,” she said.”That’s where the federal government must step in, that’s why we have the Voting Rights Act and the Civil Rights Act… Because there are moments in history where states fail to preserve the civil rights of all people,” she said.Biden said in response that he believed at the time that the decision of whether to bus students between school districts as a way of desegregating schools should be reached on a local level. At the time, many majority white communities rejected the idea out of hand and because there was no federal interference, the idea was largely dropped.”I did not oppose bussing in America,” Biden said. “What I opposed is bussing ordered by the Department of Education. That’s what I opposed.””The bottom line here is, look. Everything I have done in my career, I ran because of civil rights and continue to think we have to make fundamental changes and those civil rights,” he said.”I’m the guy that extended the voting rights for 25 years,” Biden said.The exchange followed Mayor Pete Buttigieg facing a question of his handling of a police shooting in his town of South Bend, Indiana. As other candidates broke into the debate, Harris asked for time.”As the only black person on this stage, I would like to speak on the issue of race,” she said.

Nicole Kidman reflects on her marriage to Tom Cruise: “I was young”
‘We grieve together,’ Pelosi says at COVID-19 flags memorial
Biden found images of border agents with migrants ‘horrific and horrible,’ White House says
‘Dear White People’: Justin Simien explains the purpose of ’90s music & why the series will never be “over”
Biden challenges UN to act together on pandemic, climate change
Line 3 pipeline resistance continues as activists ask Biden admin to shutdown project