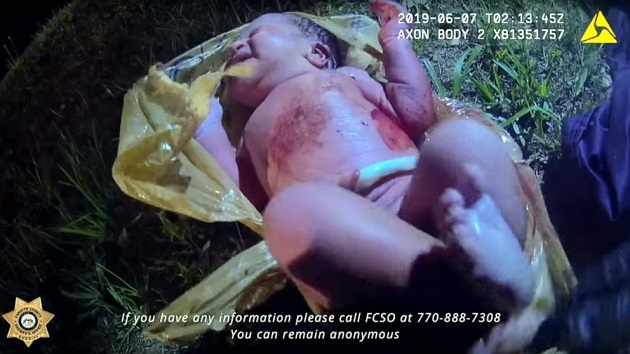 (NEW YORK) — The baby girl who was found abandoned in a plastic grocery bag in Georgia earlier this month is now “laughing” and “smiling,” and may soon find a forever home, according to Tom Rawlings, the director of Georgia’s Division of Family and Children Services.”We have people waiting in line to provide that child with a forever home,” Rawlings said in an exclusive interview with ABC News’ Good Morning America.The unidentified infant, who has been given the name India, was found on June 6 in a plastic grocery bag along the side of a road in Forsyth County. Authorities released bodycam footage of her rescue that pulled at the heartstrings of viewers across the country.”In child protective services we deal with a lot of tragedy, of course, but it’s great to have a miracle,” Rawlings said of baby India’s survival. “And this truly is a miracle.””I’ve been working child protective services for almost 20 years now, this is one of the most exciting, wonderful miracles I’ve seen in my life,” he added.While Rawlings said he couldn’t disclose too much about where India is now due to confidentiality reasons, he personally checks up on her.”I know the child’s being well cared for, I’ve been kind checking up on it,” he said.”Baby India is doing great, her health is good, and miraculously, considering what she went through, she is doing so well,” he added. “We’re hoping of course that we can find perhaps who did this but we’re also hoping we can get her in a home that will be her forever home as soon as we can.”Rawlings added that his agency has received hundreds of calls and social media messages from people interested in adopting India, though he added there is already a waiting list of about 200 families looking to adopt babies in Georgia alone.While law enforcement has been eager to find out more about the baby’s identity, Rawlings said that “so far, we haven’t found a parent or a relative yet.”Rawlings added that he hopes India’s story can help “raise awareness of the fact that there are many children out there who need homes” and encourage families to look into fostering or adopting.”Everybody loves babies, but there are plenty of 6-year-olds and 12-year-olds and 15-year-olds who just need a forever family just as much,” he added.