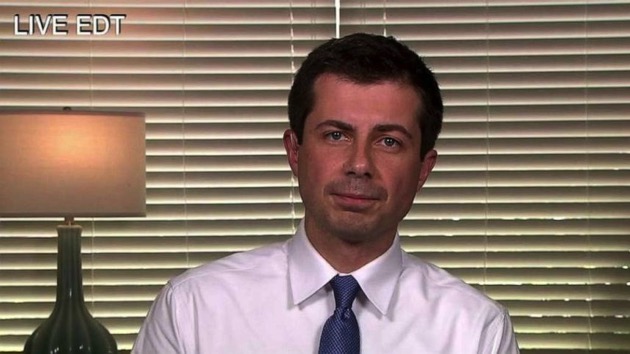 (NEW YORK) — South Bend, Indiana, Mayor Pete Buttigieg stopped by The View Friday for his third appearance at the table this year and fresh off his performance at the first presidential presidential Democratic debate in Miami.During his appearance on The View, Buttigieg shrugged off questions over the term “socialism,” saying that some Republicans would label “literally anything we do” as “socialism.””Call it whatever you like, but let’s get it done if it’s a good idea,” he said.Before joining the View co-hosts, Buttigieg stopped by the Homestead migrant detention facility with several of his 2020 candidates, to call out the Trump administration’s treatment of immigrant children.”We all believe it is unspeakable and absolutely immoral, to have children imprisoned,” he said on The View, adding that the group of candidates could not enter the privately-run facility. “They’re being held in conditions that we can’t even access. So even though our group was led by the local member of Congress, and a member of Congress, of course, is supposed to be able to inspect a federal operation like that, we only got as far as the waiting room.”Outside the facility, the mayor criticized the Republican Party for claiming to be a party of faith while also detaining children in private facilities like the one in Homestead.”They talk about family values, they talk about faith, talk about freedom. Are we seeing family values? Are we seeing freedom in that building?” Buttigieg asked.He said as long as a “profit motive” remains in place to “lock people up” in the U.S., more places like that will continue to be seen.”As I understand it, this is America’s first for-profit, child prison; let us not rest until it can be said with certainty that this is America’s last ever for-profit child prison,” he said.On the debate stage the previous night, he used the same type of attack against the GOP. Buttigieg, who often brings up his Episcopalian faith on the campaign trail and the importance of Democrats needing to reclaim a discussion on faith, says the “hypocrisy” needs to be called out “when we see it.””For a party that associates with Christianity, to say it is OK to suggest that God would smile on the division of families at the hands of federal agents that god would condone putting children in cages has lost all claim to ever use religious language again,” he said.Thursday night, the 37-year-old mayor also spoke about the current atmosphere of South Bend, where the community has been vocally angry over the shooting death of Eric Logan.”My community is in anguish right now,” Buttigieg said at the debate, after being asked why the relationship between the black community and police department remains broken despite efforts to repair the trust and the lack of diversity on the force.”Because I couldn’t get it done,” he said, adding, “I could walk you through all of the things we have done as a community. All of the steps that we took from bias training to deescalation, but it didn’t save the life of Eric Logan. And when I look into his mother’s eyes, I have to face the fact that nothing that I say will bring him back.”Logan was fatally shot by Sgt. Ryan O’Neill in the parking lot of a South Bend apartment complex on June 16. The victim was allegedly breaking into vehicles and when O’Neill approached him, he says Logan had a knife. The officer did not have his body camera on during the incident.Anger and frustration quickly spread across the city, and the mayor was forced to cancel events in New York City and Los Angeles that week to be in South Bend to monitor the situation and meet with community members and family of the victim.Buttigieg also pulled out of Rep. Jim Clyburn’s Fish Fry in South Carolina that Friday night to return home and join a march and protest.A week later, the mayor held a town hall with the police chief and was the target of members of the South Bend community for not doing enough to prevent incidents like this from happening.During the debate, Buttigieg said this is an issue happening not only happening in his town, but across the country.”The fact that there is a wall of mistrust, put up one racist act at a time, not just from what happened in the past, but from what’s happening around the country in the present,” Buttigieg said. “It threatens the well being of every community. And I am determined to bring about a day when a white person driving a vehicle and a black person driving a vehicle, when they see a police officer approaching, feels the same exact same thing.”Copyright © 2019, ABC Radio. All rights reserved.