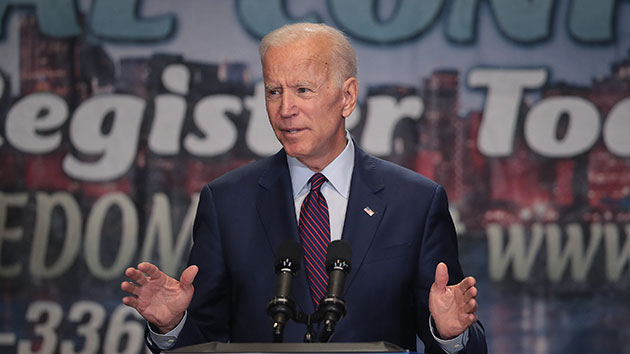 (CHICAGO) — Former Vice President Joe Biden on Friday tried to clarify his views on forced school busing after his tense exchange with Sen. Kamala Harris at Thursday night’s Democratic debate in Miami.Joe Biden, Bernie Sanders and Kamala Harris participate in the second night of the first 2020 democratic presidential debate at the Adrienne Arsht Center for the Performing Arts in Miami, June 27, 2019.Harris had confronted Biden about his comments about working with segregationist senators, and statements he’s made about opposing busing in the 1970s.”Before I start, I’d like to say something about the debate we had last night, and I, I heard and I listened to and I respect Senator Harris. But you know, we all know that a 30 seconds to 60 seconds on a campaign debate exchange can’t do justice to a lifetime committed to civil rights,” Biden said, deploying some damage control at the top of a speech in Chicago at the Rev. Jesse Jackson’s Rainbow Push Coalition conference.”I want to be absolutely clear about my record and position on racial justice, including busing. I never, never, never ever opposed voluntary busing — and as a program, that Senator Harris participated in, and made a difference in her life. I did support federal action to address root causes in our schools and communities, including taking on the banks and redlining and trying to change the way in which neighborhoods were segregated. I’ve always been in favor of using federal authority to overcome state initiated segregation,” Biden said.”I’ve always been in favor of using federal authorities to overcome state-initiated segregation. In fact, I cast a deciding vote in 1974 against an amendment called the Gurney Amendment, which would have banned the right of the federal courts to be able to use busing as a remedy. And you might guess, in the middle of the most extensive busing order in American history in my city and my state, it wasn’t what you would call the most popular vote in the country at the time,” he said.”I fought my heart out to ensure that civil rights, and voting rights, equal rights are enforced everywhere,” he said. “These rights are not up to the states to decide, they’re our federal government’s duty to decide. It’s a constitutional question to protect the civil rights of every single American. And that’s always been my position.”Biden’s comments on Friday came after Harris took on Biden over his recent remarks on working alongside segregationist Democrats as a young senator, despite disagreeing with their views, in order to find compromise and get legislation passed.”I do not believe you are a racist and I agree with you when you commit yourself to the importance of finding common ground, but I also believe and it’s personal and it was hurtful to hear you talk about the reputations of two United States senators who is built their reputations and career on the segregation of race in this country,” Harris said in the debate Thursday night.”And it was not only that, but you also worked with them to oppose busing. And, you know, there was a little girl in California who was part of the second class to integrate her public schools, and she was bused to school every day. And that little girl was me,” Harris continued recalling her own experience with busing.Biden immediately responded to Harris’ charge Thursday night.”It’s a mischaracterization of my position across the board. I did not praise racists. That is not true,” Biden said. “If we want to have this campaign litigated on who supports civil rights and whether I did or not, I’m happy to do that”“What I opposed is busing ordered by the Department of Education,” he said, seemingly referring to busing ordered by federal courts contrasted with busing carried out at the state and local level.Copyright © 2019, ABC Radio. All rights reserved.