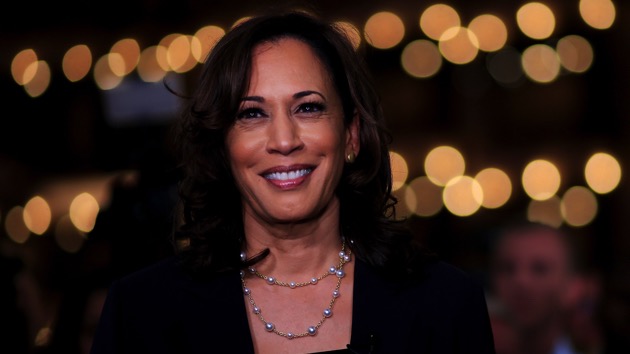 (NEW YORK) — Fresh off her strong performance at Thursday’s Democratic debate, Kamala Harris on Friday was trying to capitalize on one of the most striking moments of the night: her heated back-and-forth with former Vice President Joe Biden and his history of working with segregationists and his opposition to forced school busing.Appearing on MSNBC’s Morning Joe program Friday morning, Harris said, “I was actually a bit surprised to hear how he described in defense of his position, his perspective on the role of the federal government, and in particular, he mentioned the Department of Education.”Biden had countered Harris’ argument by calling it “a mischaracterization of my position across the board,” saying he “did not praise racists,” and did not oppose busing in America. “What I opposed is busing ordered by the Department of Education,” he said, apparently referring to busing ordered by federal courts contrasted with busing carried out at the state and local level.“I just think he and I have a difference of opinion and also difference of opinion on states’ rights,” Harris said Friday when she was asked if Biden’s racial insensitivity would make him unfit for the presidency.During the debate, Harris called his partnership with the late Sens. James Eastland, D-Miss., and Herman Talmadge, D-Ga., “personal” and “hurtful,” recounting her personal experience with discrimination growing up, specifically his opposition to busing programs that integrated schools.“There was little girl in California who was part of the second class to integrate her public schools, and she was bused to school every day,” Harris said. “And that little girl was me.”The Harris campaign tweeted a photo of the senator during the debate showing a young Harris in California with a backpack and are capitalizing on the moment by quickly putting that photo on a t-shirt as part of her campaign merchandise.Harris, the only African-American on the stage last night, continued pressing Biden, pointing out that even though Biden thought the federal government shouldn’t have been involved in busing, states continued to fail at integrating public schools.“There are moments in history when states fail to preserve the civil rights of all people,” she said, saying that was a moment the federal government needed to step in.Earlier this month, Biden called for more “civility” in politics during a fundraiser in New York City, and boasted his work with the Eastland saying he “never called me ‘boy,’ he always called me ‘son,’” and added, “We got things done. We didn’t agree on much of anything. We got things done. We got it finished. But today you look at the other side and you’re the enemy. Not the opposition, the enemy. We don’t talk to each other anymore.”This morning, Harris said “there is no question we have got to find common ground” on Capitol Hill, saying bipartisanship has been one of her main focuses since being elected to the Senate,” but found the characterization of the late senators to be “misplaced.”“It was hurtful to me to hear that we would be nostalgic about people who if they had their way, I would not serve in the United States Senate,” Harris said.Harris also clarified a moment surrounding a question on health care, when she and Vermont Sen. Bernie Sanders were the only candidates to raise their hand when asked: “Who here would abolish their private health insurance in favor of a government-run plan?”Harris this morning saying she would not do that, explaining that she misinterpreted the question. She said she understood the question to be, “Would you give up your private insurance for that option? And I said, Yes.”“I am a proponent of Medicare for all, private insurance will exist for supplemental coverage,” Harris said on MSNBC.A Harris aide tells ABC News that she had the best fundraising day on Thursday of her entire campaign, with the exception of the day after her launch and the actual launch day in January.Copyright © 2019, ABC Radio. All rights reserved.

‘Sex and the City﻿’ star Willie Garson passes away at age 57
Brian Laundrie search ends for day after finding ‘nothing of note’: Live updates
“Disney+ Day” — ‘Shang-Chi’, ‘Jungle Cruise’, a Boba Fett special, and more coming on November 12
Nicole Kidman reflects on her marriage to Tom Cruise: “I was young”
How Meghan Trainor avoided the biggest workplace hazard on ‘Top Chef: Family Style’
‘We grieve together,’ Pelosi says at COVID-19 flags memorial