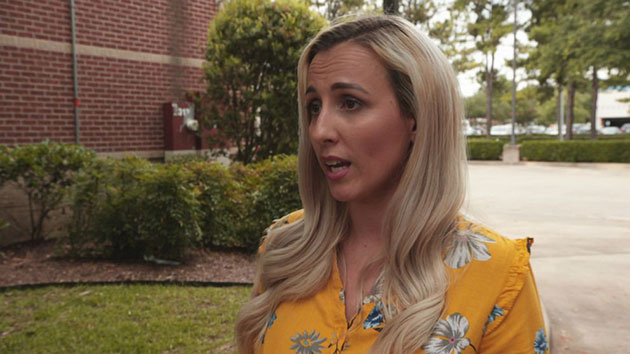 (KATY, Texas) — As Abby Catt prepared to carry out her second bank robbery with her brother and her father, she said the two men were so nervous that they tried — to no avail — to down shots of alcohol before carrying out the crime. Little did they all know that this robbery for which they lacked confidence would ultimately lead to their undoing.Abby Catt, her brother Hayden Catt and her father Scott Catt robbed about $30,000 from the First Community Credit Union in Katy, Texas, in October 2012, just two months after they stole about $70,000 from Comerica Bank in the same city, which is also the place they called home. In both instances, Abby Catt drove the getaway car while her father and brother carried out the robberies.Chrystal Fassett, a teller at the First Community Credit Union, was having lunch in the bank’s break room, so she didn’t see the father and son enter the bank. Fasset said she first took notice of a robbery occurring when a light began flashing in the break room, indicating that someone else in the bank had hit the panic alarm. She said she could see the men on camera from the break room and that they stood out because they were donning bright orange construction vests. She wondered for a split second, “What are they here to fix?”But it was almost immediately clear that the two men were not there to fix anything. Hayden Catt jumped behind the tellers’ counter and had the tellers empty out their tills while his father moved the bank’s employees toward the bank’s vault, Fort Bend County Sheriff Troy Nehls told ABC News.”You can see that he goes directly for the bank manager ’cause she’s in charge,” Jeff Martin, former Fort Bend County detective, told 20/20. “She’s the one that’s gonna have access to the safe. She becomes instantly aware that there’s a robbery takin’ place. She activates her silent alarm.”The thieves may not have realized that several of the bank’s employees were at lunch in the bank’s break room. Among them was Fassett, who was on the phone with her boyfriend.”I just kinda stopped, and I looked up, and I told the person on the phone… ‘I’ve gotta go,"” she said.Not only were those in the break room monitoring the situation from inside the bank’s break room, but they were also writing down descriptions of each of the thieves.Fassett said her “heart was racing” when she realized a robbery was taking place. “I felt a pit in my stomach. I felt scared for my co-workers,” she said.It was the second robbery at First Community Credit Union in six months, according to David Williams, a detective with the Fort Bend Sheriff’s Office.When the Catts brought the bank employees to unlock the vault, they were so “flustered” by the robbery that “they couldn’t get the combos right to open the safe fast enough,” Fassett said.The Catt family robbed two banks and stole an estimated $100,000 in total.But they did retrieve some money from the vault, Nehls said, and within minutes they were gone out of the back of the building.”Like a bolt of lightning, [they] ran right past the break room, out this back door,” Fassett said. “As soon as they busted through that door, the alarm sounded.”She said it was in that moment that she realized what just took place.”They robbed us. It took everything I had to remember, ‘Oh my God, look out the window and look for them."”Throwing open the blinds, she said she saw them walking down the sidewalk “fast as they could until they got to the curb, and then they stopped. … They just kind of casually walked to the car.”Abby Catt drove off with her brother, father and the cash, but the trio left behind evidence. In planning the heist, the family had stolen license plates off of another car and taped them onto their own to hide the car’s real plates — a tactic they hoped would allow them to easily rip off the stolen plates once they had returned home.But one of the stolen plates had fallen off where Abby had parked the getaway car. Police were able to find Scott Catt’s fingerprints on it.Another key piece of evidence was discovered by one of the detectives on the case, who noticed that the creases on the construction vests indicated that they had most likely just been taken out of their packaging.Nehls said this clue led them to a Home Depot, where they saw that construction vests had been purchased the night before with Scott Catt’s credit card. Surveillance footage showed that there were two people who bought the vests — a man and a woman — and after looking up Scott Catt on social media, detectives were able to identify the two people at Home Depot as his kids.On Nov. 9, 2012, Scott Catt and his two children were arrested. Scott Catt pleaded guilty to aggravated robbery and accepted a sentence of 24 years. Hayden Catt accepted a plea deal with a sentence of 10 years. And Abby Catt accepted a plea deal for five years.

Since their convictions, Abby Catt has been released and, despite some bumps along the way, is now making an effort to return to normal life. Now living back in Oregon, she and her boyfriend are expecting a baby boy in late August. She’s working at a fish processing plant and says she’s committed to being the mother she never had to her child — Hayden and Abby Catt lost their mother to cancer when they were very young. Both her brother and father remain in prison.