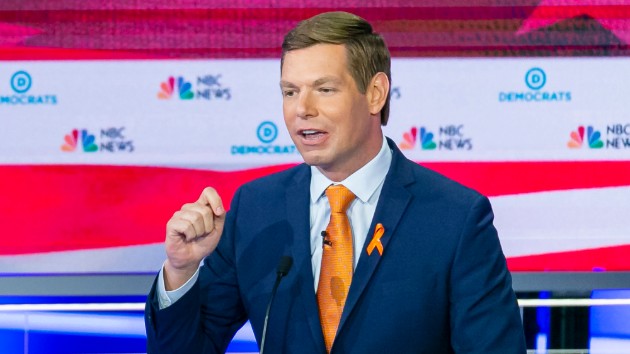 (MIAMI) — California Congressman Eric Swalwell passionately advocated for his proposal to buy back every assault weapon in the United States during the second night of the first Democratic primary debates, invoking recent mass shootings and how his role as a parent influences his views on gun control. “Keep your pistols, keep your rifles, keep your shotguns, but we can take the most dangerous weapons from the most dangerous people,” Swalwell said. The 38-year-old father said that parents now send their kids to school remembering what they’re wearing “in case we have to identify them later,” and that members of his generation “look for fire exits” in movie theaters in case of a mass shooting.”We don’t have to live this way,” he said. “We must be a country who loves our children more than we love our guns.”Vermont Sen. Bernie Sanders said the United States is experiencing “a gun crisis.””I believe that what we need is comprehensive gun legislation that among other things provides universal background [checks],” and ends the “gun show loophole,” he said.Sanders added he would “ban the sale and distribution” of assault weapons, saying they are weapons for the military, and when repeatedly asked by Swalwell if he would buy them back, Sanders said, “If the government wants to do that, if the people want to bring them back, yes.”Fellow Californian Kamala Harris said Swalwell’s idea was “great,” but the problem is that Congress hasn’t “had the courage to act.””I will give the United States Congress 100 days to pull their act together, bring all these good ideas together and put a bill on my desk for signature,” the senator said. “And if they do not, I will take executive action, and I will put in place the most comprehensive background check policy we’ve had.”She added, “As a prosecutor, I have seen more autopsy photographs than I care to tell you. I have hugged more mothers who are the mothers of homicide victims, and I have attended more police officer funerals. It is enough. It is enough.”South Bend, Indiana, Mayor Pete Buttigieg, a veteran of the Afghanistan war, also weighed in on the gun debate, saying, “As somebody who trained on weapons of war, I can tell you that there are weapons that have absolutely no place in American cities or neighborhoods in peacetime. Ever.””If more guns made us safer, we would be the safest country on Earth,” he added. “It doesn’t work that way.”Former Vice President Joe Biden said he’s “the only person that’s beaten the NRA nationally,” but also said that organization isn’t the enemy here.”We should have smart guns. No gun should be able to be sold unless your biometric measure could pull that trigger. It’s within our right to do that; we can do that,” he said. “Our enemy is the gun manufacturers, not the NRA — the gun manufacturers.”Copyright © 2019, ABC Radio. All rights reserved.

SEC admits error in Penn State-Auburn game
How LA County countered recall-election disinformation in real time on social media
Latinos in sports are drawing on their heritage to inspire others
McAuliffe, Youngkin spar over vision for commonwealth in first Va. gubernatorial debate
COVID-19 live updates: More than 10,000 new deaths reported in US in one week
Murdaugh murders and mysteries timeline: Key events in the South Carolina family’s scandals and deaths