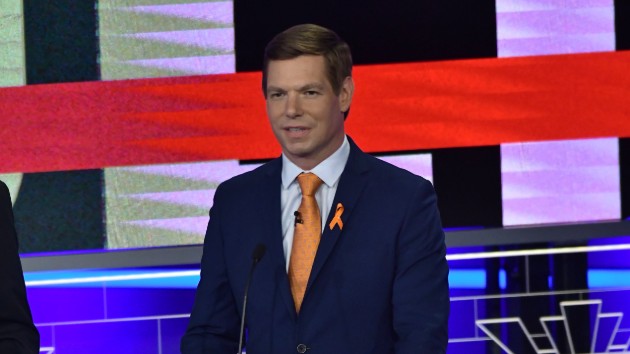 (MIAMI) — As he faced Democratic rivals on the presidential debate stage in Miami on Thursday, California Rep. Eric Swalwell wore an orange ribbon on his lapel to commemorate the victims of last year’s shooting in Parkland, Florida. When asked what issue he would make a top priority if elected president, the congressman again turned to mass shootings, referencing Parkland and the shooting at the Pulse nightclub in Orlando. Thursday’s debate, at the Adrienne Arsht Center for the Performing Arts, was just 45 minutes from Marjory Stoneman Douglas High School.”For Parkland, for Orlando, for every community affected by gun violence, ending gun violence,” he said.The ribbon was made by the father of 14-year-old Jamie Guttenberg, who was one of 17 people killed in the February 2018 shooting at Marjory Stoneman Douglas High School. Guttenberg’s dad, Fred Guttenberg, joined Swalwell at the debate as his guest.Google recorded a surge of interest in the orange ribbon after Swalwell appeared on stage.While many candidates in the 2020 field have come out in support of banning all assault weapons, Swalwell has taken the conversation further and called for a mandatory national buy back program for assault weapons. Copyright © 2019, ABC Radio. All rights reserved.

US enters deferred prosecution agreement with detained Huawei executive Weng Manzhou
Harris interview with ‘The View’ delayed after co-hosts test positive for COVID-19
Haitian migrants cleared from camp at Texas border but controversy continues
Tony nominee Katori Hall shares what she’ll do with her award if she wins on Sunday night
Billy Bob Thornton and Tania Raymonde on bringing ‘Goliath’ to a close with new fourth season
With Julius Jones’ execution date looming, family refuses to give up hope