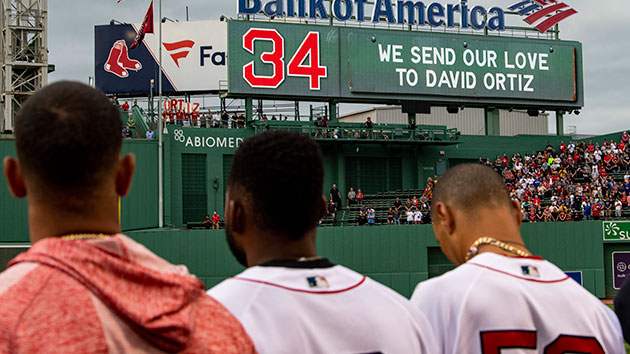 (NEW YORK) — Two more arrests have been made in connection with the shooting of former Boston Red Sox baseball star David Ortiz, including a man police say was one of the masterminds behind the Dominican Republic National Police announced today.The ‘mastermind’ suspect was named as Victor Hugo Gomez, who police last week said was a convicted drug dealer who allegedly associated with a number of the individuals involved in the shooting while serving time in prison. Police said that Gomez had intended to target his cousin, Sixto David Fernandez, and said that Ortiz was the victim of mistaken identity.”National Police have arrested Victor Hugo Gomez, one of the masterminds of the attack that injured the former baseball player David Ortiz,” the police tweeted.Police also announced the arrest of Alberto Rodriguez Mota, who allegedly took the photo of the table where the intended target of the shooting.“Our Dominican Republic National Police announce the arrest of Alberto Rodríguez Mota, who was captured by members of the Dominican Republic Navy on the high sea, specifically off the coast of Samaná, trying to go to Puerto Rico, where he would evade Dominican justice,” the police force tweeted.Gomez, one of the “masterminds” behind the shooting, had a business relationship with Fernandez that turned sour after he blamed his cousin for getting him jailed, Dominican authorities said. Fernandez was seated at the same table as the Red Sox slugger known as ‘Big Papi’ at the time of the shooting on June 9.After being shot and collapsing at the bar as a crowd of patrons scattered at the sound of gunfire, Ortiz underwent surgery at a Santo Domingo hospital. During the operation, doctors removed parts of his small and large intestines and liver.He was then flown to Boston in an air ambulance jet chartered by the Red Sox and underwent a second surgery at Massachusetts General Hospital.Gomez’s last known location was the United States, according to Dominican police, where he is wanted for his alleged role in drug trafficking. He was already well-known by U.S. authorities, having been charged in March 2019 as part of a drug trafficking sting in Houston entitled “Operation Wrecking Ball,” according to authorities.Last week, Dominican officials said they had no record of Gomez having returned to the Dominican Republic.It was not immediately clear whether Gomez had retained a defense attorney in the Dominican Republic, and authorities there did not provide reporters with any contact information for a legal representative for the jailed man.Copyright © 2019, ABC Radio. All rights reserved.

Hostess assaulted at NYC restaurant after asking Texas patrons for proof of COVID-19 vaccination
‘We are prepared’: Law enforcement stresses readiness ahead of right-wing rally
Emmy Awards host Cedric the Entertainer says he’s committed to improving conditions for Black comedians
Statue of Bitcoin founder honors mysterious ‘god’ of cryptocurrency
COVID-19 live updates: More than 10,000 new deaths reported in US in one week
Tyra Banks defends Olivia Jade ahead of her ‘Dancing with the Stars’ debut: “Olivia is so brave”