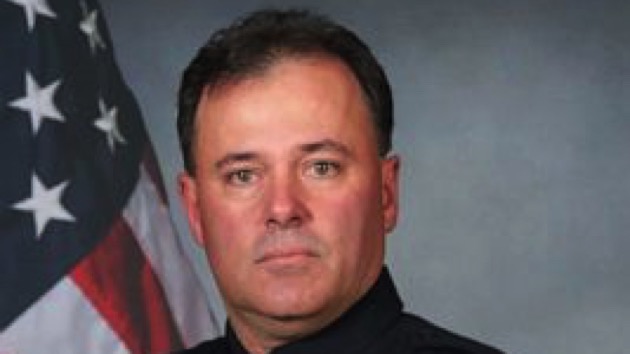 (MILWAUKEE, Wis.) — A suspect has been taken into custody 10 days after he allegedly gunned down an off-duty Wisconsin police officer during a robbery attempt.The suspect, 26-year-old Dalquavis Ward of Milwaukee, was taken to jail Thursday in slain Officer John Hetland’s handcuffs, Kenosha County Sheriff David Beth said.”That part feels good,” Beth said at a news conference on Thursday.Hetland, a 24-year veteran of the Racine Police Department, had worked the day shift on June 17. That night, he was off-duty and at Teezers Tavern in Racine when he saw an armed robbery unfolding, police said.Hetland, a father of two, tried to intervene and was shot, police said.The slaying launched a massive manhunt for his killer.Authorities released photos of a suspect and a reward for information climbed to $80,000.Racine County Sheriff Christopher Schmaling called the suspect a “coward.”The crime lab gave information leading police to find Ward in Milwaukee, Sheriff Beth said, though he did not elaborate on what led investigators there.With a somber group of police officers behind him, Racine Police Chief Art Howell said Thursday, “John was clearly a special member of our department. But we have a lot of members who exemplify the same spirit.””The only way we can honor John Hetland is to emulate John Hetland,” Howell said.”The city experienced a loss that we haven’t experienced in 45 years,” Racine Mayor Cory Mason said Thursday.”Our city has been grieving,” he said, but now “we can breathe a sigh of relief” that a suspect is in custody.Copyright © 2019, ABC Radio. All rights reserved.