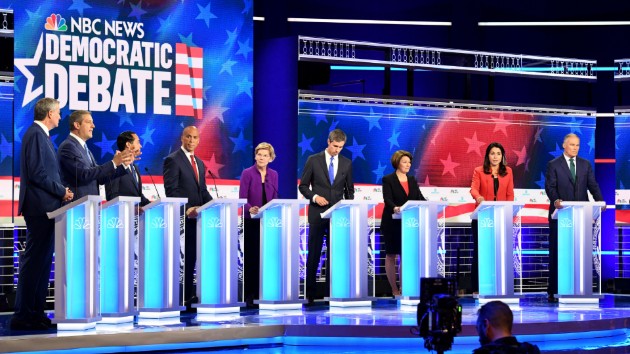 (MIAMI) — Ten 2020 candidates took to the stage Wednesday night, with each trying to make his or her case as to why they deserve to be the party’s nominee. Here are the top five buzzworthy moments from the first night of Democratic presidential debates:Candidates showed off their Spanish-speaking prowessSeeking to appeal to Latino voters, three candidates answered questions in Spanish.Seemingly out of left field, former Texas Rep. Beto O’Rourke broke out into Spanish in his opening response to a question about a marginal tax rate of 70 percent on earners who make more than $10 million. First, in English, he said, “This economy has got to work for everyone and right now we know that it isn’t, and it’s going to take all of us coming together to make sure that it does.” O’Rourke then switched to Spanish, adding, “We need to include each person in the success of this economy. But if we want to do that, we need to include each person in our democracy. Each voter, we need the representation, and each voice, we must listen to.”What went viral was New Jersey Sen. Cory Booker’s facial expression when O’Rourke started speaking in Spanish.Booker later showed off his own language skills when discussing immigration.

When asked about an image widely circulated on Wednesday of a father and his 23-month-old daughter who drowned in the Rio Grande trying to cross into the U.S., Booker responded in Spanish: “The situation right now is unacceptable. This president has attacked, has demonized immigrants. It’s unacceptable, and I will change this.”Former Obama HUD Secretary Julián Castro, the only Latino candidate, only spoke a few lines of Spanish in his closing statement: “I am Julián Castro and I am running for president of the United States.”Other 2020 contenders slotted to take the debate stage on night two — Andrew Yang and Mariane Williamson — joked on Twitter about their own Spanish speaking skills.”I need to learn Spanish by tomorrow night at 9,” Williamson tweeted. “My Spanish is terrible,” Yang tweeted. Heated exchanges over issuesHawaii Rep. Tulsi Gabbard immediately fought back against Tim Ryan after he claimed that the Taliban led the Sept. 11 terrorist attacks.Ryan said that without U.S. troops “engaged” in the Middle East “the Taliban will grow and they will have bigger, bolder terrorist acts.”Gabbard, an Iraq War veteran who served in the Hawaii Army National Guard, said Ryan’s comment was “unacceptable.””The Taliban didn’t attack us on 9/11,” Gabbard hit back. “Al-Qaeda did.””That’s why I and other people joined the military, to go after Al Qaeda. Not the Taliban,” she added.On immigration, Julián Castro pressed his policy proposal to decriminalize illegal border crossings and butted heads with Texas Rep. Beto O’Rourke. Castro’s plan would make all border crossings civil offenses, not criminal offenses.O’Rourke doesn’t support decriminalization because of concerns over violent offenders coming across the border.Castro criticized O’Rourke, saying, “I just think it’s a mistake, Beto, I think it’s a mistake. I think that if you truly want to change the system, then we’ve got to repeal that section. If not, it might as well be the same policy.”O’Rourke attempted to explain his case and pointed to his efforts in Congress: “Let me respond to this very briefly. As a member of Congress, I helped to introduce legislation that would ensure we don’t criminalize those seeking asylum. If you are fleeing desperation, I want to make sure you are treated with respect.”The heated exchange continued as O’Rourke continued to defend himself against Castro’s attacks.”You are looking at one small part of this. I’m talking about a comprehensive rewrite of this immigration law,” O’Rourke said.”That’s not true,” Castro replied. “I’m talking about millions of folks. A lot of folks that are coming are not seeking asylum. A lot of them are undocumented immigrants.”Castro closed by saying, “But let me tell you what, Title 18 of the U.S. Code, Title 21 and 22, already cover human trafficking. I think that you should do your homework on this issue. If you did your homework on this issue, you would know we should repeal this.”Klobuchar called out Inslee for man-splaining reproductive rightsAfter Washington Gov. Jay Inslee claimed he was “the only candidate here who has passed a law protecting a woman’s right of reproductive health and health insurance,” Minnesota Sen. Amy Klobuchar clapped back, saying, “I just want to say there’s three women up here that have fought pretty hard for a woman’s right to choose.””I’ll start with that,” she added, to roaring applause.Inslee said America’s greatest threat is President Donald TrumpWhile the candidates rarely mentioned Trump by name over the course of the two-hour debate, Inslee was the one who most frequently attacked the president directly, which incited some of the loudest applause of the night.When each candidate was asked to name “the single greatest geopolitical threat facing the U.S.,” Inslee declared: “The biggest threat to the security of the United States is Donald Trump. There’s no question about it.” Warren and de Blasio raised their hands in favor of abolishing private health insuranceOn health care, Massachusetts Sen. Elizabeth Warren and New York City Mayor Bill de Blasio were the only two candidates who raised their hands when asked who would abolish private health care in favor of a government-run plan.Warren said she supports Vermont Sen. Bernie Sanders’ proposal, which would do just that.”I’m with Bernie on Medicare-for-All,” Warren said.Warren went further to criticize those who say Medicare-for-all is politically infeasible.

“What they’re really telling you is they just won’t fight for it,” she said.Other more moderate candidates, such as Sen. Amy Klobuchar and former Maryland Rep. John Delaney, pushed back on her position.“I think we should be the party that keeps what’s working and fixes what’s broken,” Delaney said.When O’Rourke defended preserving private healthcare saying it is “fundamental to our ability to get everybody cared for,” de Blasio interjected.“Congressman O’Rourke, private insurance is not working for tens of millions of Americans when you talk about the copays, the deductibles, the premiums, the out-of-pocket expenses — it’s not working,” de Blasio said. “How can you defend a system that’s not working?”Ten more Democrats are set to take the stage Thursday night.Copyright © 2019, ABC Radio. All rights reserved.