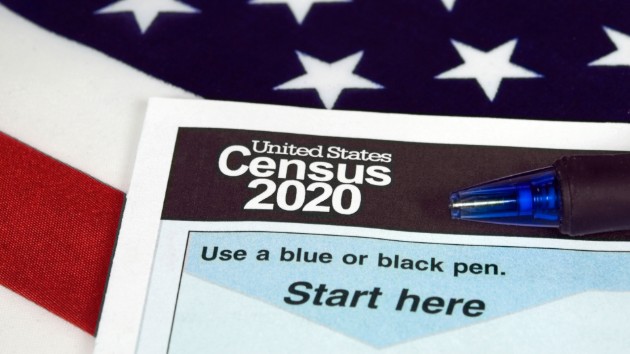 (WASHINGTON) — Chief Justice John Roberts joined with the Supreme Court’s liberal bloc on Thursday to reject the Trump administration’s justification for adding a citizenship question to the 2020 census, sending the matter back to the Commerce Department for further explanation and review.The decision blocks the addition of a citizenship question for now, but appeared to leave open the possibility that the administration could make another attempt to add it. The Census Bureau is poised to print the 2020 census forms in the next few days, making addition of the question potentially impossible.In unusually sharp terms, Roberts criticized Commerce Secretary Wilbur Ross and the administration for essentially fabricating a case for the citizenship question, rejecting its claim in court that it was a solely a request of the Justice Department for help enforcing the Voting Rights Act.”Altogether, the evidence tells a story that does not match the explanation the Secretary gave for his decision. In the Secretary’s telling, Commerce was simply acting on a routine data request from another agency. Yet the materials before us indicate that Commerce went to great lengths to elicit the request from DOJ (or any other willing agency),” Roberts wrote. “And unlike a typical case in which an agency may have both stated and unstated reasons for a decision, here the VRA enforcement rationale—the sole stated reason—seems to have been contrived. “”We cannot ignore the disconnect between the decision made and the explanation given,” Roberts adds. “Our review is deferential, but we are ‘not required to exhibit a naiveté from which ordinary citizens are free."”Accepting contrived reasons would defeat the purpose of the enterprise. If judicial review is to be more than an empty ritual, it must demand something better than the explanation offered for the action taken in this case,” he said. “We do not hold that the agency decision here was substantively invalid. But agencies must pursue their goals reasonably. Reasoned decisionmaking under the Administrative Procedure Act calls for an explanation for agency action. What was provided here was more of a distraction.”Traveling overseas in Japan, President Donald Trump tweeted that the court’s decision was “ridiculous” and said he would try to delay the census.Justice Clarence Thomas, joined in part by Justices Neil Gorsuch and Brett Kavanaugh, called the majority opinion an “erroneous decision” that wrongly assumed the Trump administration was acting in bad faith.”This Court has never held an agency decision arbitrary and capricious on the ground that its supporting rationale was ‘pretextual.’ Nor has it previously suggested that this was even a possibility,” Thomas wrote in his dissent.”An agency action is not arbitrary or capricious merely because the decisionmaker has other, unstated reasons for the decision,” he continued, defending Commerce Secretary Wilbur Ross. “Nor is an agency action arbitrary and capricious merely because the decisionmaker was ‘inclined’ to accomplish it before confirming that the law and facts supported that inclination.”Ross and the Trump administration have not made a “strong showing of bad faith or improper behavior,” Thomas wrote.The decision leaves open the possibility that the Commerce Department could try again to add a citizenship question to the census, but it’s not clear they can do so in time.The Justice Department and Commerce Department did not immediately respond to ABC News’ request for comment.”Given the likely legal challenges that would come to whatever new case the department might present, and ongoing lower court litigation over evidence in the case, it is remotely likely that the administration will actually be able to add the question,” said ABC News’ legal analyst Kate Shaw.“This case has never been about a line on a form. It is about whether everyone in America counts. This ruling means they do,” said Dale Ho, an attorney with the ACLU who argued before the Surpeme Court on behalf of challengers of the citizenship question.Demographic researchers hailed the decision as a win for accuracy in the coming decennial count.“This is a win for the science behind the Census plain and simple,” said John Casterline, president of the Population Association of America, a group of data scientists. “A scientifically accurate census count means better data and the ability to provide more efficient and effective services to people across the country.”Copyright © 2019, ABC Radio. All rights reserved.

Key takeaways from US military leaders on Afghanistan withdrawal
“The world has changed. He hasn’t” – ‘Curb Your Enthusiasm’ teaser reveals premiere date for Season 11
Following jail sentence in college cheating scandal, Lori Loughlin returning to TV’s ‘When Hope Calls’
Milley defends calls to China amid concerns about Trump
Lisa Ling regrets making comment about Monica Lewinsky on ‘The View’: ‘My heart sunk’
After quitting the fashion industry, supermodel Halima Aden is back — this time, on her own terms