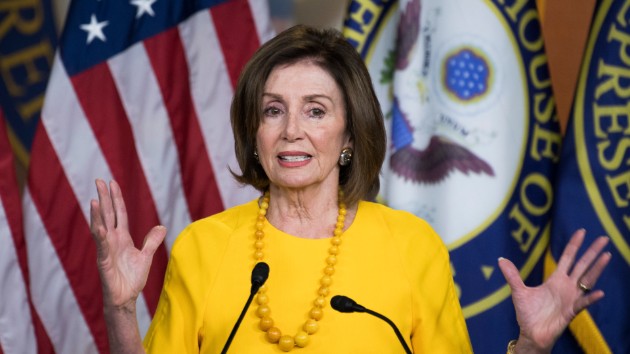 (WASHINGTON) — After Senate Majority Leader Mitch McConnell threatened to kill the humanitarian border funding on Thursday if the House amends a bipartisan compromise passed by the Senate on Wednesday, House Speaker Nancy Pelosi warned McConnell that he’d own the public blowback from killing the bill. As she left the House chamber and walked back to her office, Thursday morning, ABC News asked her about McConnell’s floor speech Thursday morning, in which he threatening to kill the Democrats’ amendment. “I don’t think there’s room for any threats here. We’re not threatening him,” Pelosi, D-Calif., said. “This is a moral imperative. It’s not about threats or conditions or anything like that. It’s about what’s doing right for the children and not taking the path of least resistance.”Ahead of a possible House vote Thursday, McConnell delivered a speech on the Senate floor, contending “it is crystal-clear” that some of the Democratic demands “would drag this bipartisan bill way back to the left and jeopardize the Shelby-Leahy consensus product that unified the Senate and is so close to becoming law.” “If House Democrats send the Senate back some partisan effort to disrupt our bipartisan progress, we will simply move to table it,” McConnell promised. “We already have our compromise. The Shelby-Leahy Senate bill is the only game in town. It’s time to make it law.” But House Democrats are not satisified with that legislation, and are making changes to add additional child migrant protections, while reducing spending in the bill carved out for the Defense Department and slashing $81 million in funds for Immigration and Customs Enforcement. Pelosi was unmoved by McConnell’s threat, and warned he would own the public reaction if Congress is unable to put a bill on the president’s desk before the Independence Day recess. “I commend the superior knowledge of the House members in writing a bill that does much more for the children,” Pelosi said. “So whatever he wants to do, he has to know, the public will know that he came down against the interest of the children.” Copyright © 2019, ABC Radio. All rights reserved.