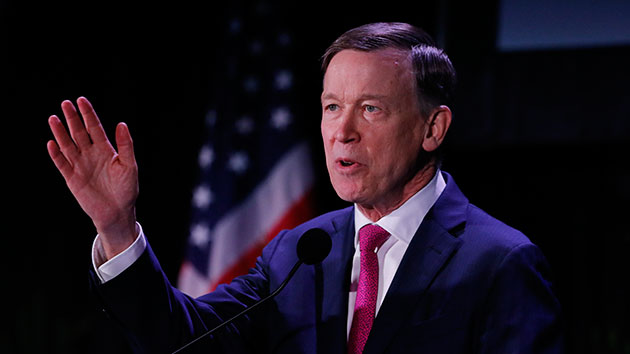 (NEW YORK) — Former Colorado Gov. John Hickenlooper has been described as a “politician as unusual as his name.”Hickenlooper turned his success as a brewery owner into a successful political career, becoming the mayor of Denver and then governor. He is known for his willingness to work across party lines and is considered to be a “moderate problem-solver.”He’s been fueling 2020 rumors for months.Before his term as governor ended in January, Hickenlooper crisscrossed the country, visiting key primary states such as Iowa and New Hampshire. In December, he reportedly interviewed campaign staffers and hired a pollster.A Washington Post op-ed called Hickenlooper the “opposite” of President Donald Trump. The two-term governor told Time magazine in October that he agreed it was true in regard to how he runs his business.”I’ve never been sued,” Hickenlooper said. “I’m always the antidote to Trump in that sense. In the restaurant business, you kind of define your success by the [idea] that there’s no profit in having enemies. That’s the business I came from. I think President Trump, when he was in business, defined himself by who his enemies were and how successfully he could attack them or malign them or sue them.”One thing is certain — his campaign strategy is sure to be vastly different than Trump’s in 2016. In 2010, Hickenlooper promised to never run negative campaign advertisements.Here’s everything you need to know about the 2020 hopeful:Name: John HickenlooperParty: DemocratDate of Birth: Feb. 7, 1952Age: 67Hometown: Narberth, PennsylvaniaEarly Life: He grew up middle-class in a suburb of Philadelphia. He is the son of Anne and John Wright Hickenlooper. His paternal great-grandfather was Union general Andrew Hickenlooper. He was raised by his mother after his father died when he was young.Education: He attended college and graduate school at Wesleyan University in Middletown, Connecticut, where he earned a bachelor’s degree in English and a master’s degree in geology.What He Does Now: EntrepreneurWhat He Used To Do: Hickenlooper’s first career was in geology. He worked in Colorado for Buckhorn Petroleum in the early 1980’s before he was laid off.In 1988, he co-founded Colorado’s first brewpub, the Wynkoop Brewing Company.Fifteen years later, in 2003, Hickenlooper entered the political sphere, serving as the 43rd mayor of Denver for two terms. He received widespread recognition for successfully marketing the city of Denver as the place to host the 2008 Democratic National Convention.In 2011, he was elected Colorado’s 42nd governor. He was re-elected but unable to run for a third term due to constitutional restrictions. During his time as governor, he was vice chair of the Democratic Governors Association, chairman of the National Governors Association and a member of the Western Governors Association.On Gun Control: Hickenlooper has been a strong advocate for gun control legislation after 12 people were killed at a movie theater in Aurora, Colorado, in 2012.”I was ambivalent on this to a degree,” Hickenlooper said in 2013, because of the problems for law-abiding gun owners. “But in the end, these high-capacity magazines turn killers into killing machines. I think the potential for damage seems to outweigh the inconvenience.”He went on to sign three major gun control proposals that banned high-capacity magazines and required background checks for any firearm transfer within Colorado.Hickenlooper also has spoken out against Trump’s idea to arm teachers after the Parkland, Florida, shooting in February 2018.”When I’ve talked to teachers, literally almost no teacher wants to be carrying a weapon,” Hickenlooper told NPR.Hickenlooper considers mass shootings a form of domestic terrorism.”I mean, children are getting, you know, slaughtered in our schools,” he said shortly after the Marjory Stoneman Douglas High School shooting. “I mean, and it’s not just the kids. Places of worship. People going to country music concerts. We’re allowing ourselves to be terrorized by, in essence, by our neighbors.”On Legalizing Marijuana: In 2012, Colorado passed a measure to seek the legalization of recreational marijuana use. It allowed adults to purchase marijuana from dispensaries and grow up to six plants privately.Hickenlooper was strongly against the passage of the amendment, but after it passed he said he would have to respect the will of his constituents, despite their wishes being against federal law.His resistance to weed legalization has weakened over the past few years.”Most of the worst fears that we had in legalizing recreational marijuana haven’t come to pass,” Hickenlooper told Time in October. “States are the laboratories of democracy, and I think this is one of the great social experiments.”Copyright © 2019, ABC Radio. All rights reserved.