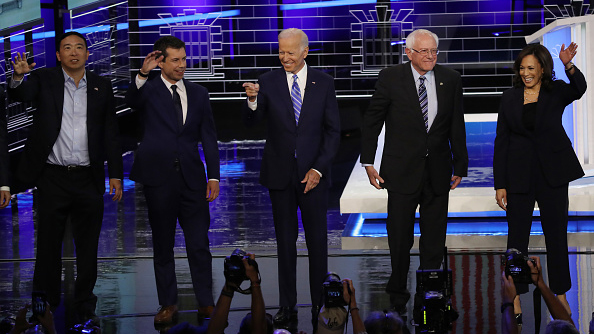 (WASHINGTON) — Here’s ABC News’ fact check of the second of two Democratic presidential debates in Miami between former Vice President Joe Biden, Sen. Bernie Sanders, Sen. Kamala Harris, Mayor Pete Buttigieg, Sen. Michael Bennet, Sen. Kirsten Gillibrand, former Gov. John Hickenlooper, Rep. Eric Swalwell, author Marianne Williamson and entrepreneur Andrew Yang.FACT CHECK: Sanders on wealthiest three Americans vs the bottom 50% of AmericansSanders: “We have a new vision for America and at a time when we have three people in this country owning more wealth than the bottom half of America, while 500,000 people are sleeping out on the streets today, we think it is time for change, real change.”Sanders is likely citing a 2018 Forbes estimate of the three wealthiest individuals in the U.S. Jeff Bezos, Bill Gates and Warren Buffett had a combined net worth of $330 billion. According to Forbes, Bezos and his family have approximately $160 billion, Gates has $97 billion and Buffett had an estimated net worth of $88.3 billion.The 2016 Federal Reserve Survey of Consumer Finances estimated that the bottom 50% of Americans held a combined net worth of $245 billion.A 2015 study from the U.S. Department of Housing and Urban development reported 500,000 people were homeless during the year 2015.

The push for electric vehicles may be killing sedans for good: Experts
Harris interview with ‘The View’ delayed after co-hosts test positive for COVID-19
‘The View’ hosts leave mid-show due to testing positive for COVID-19, miss Vice President Harris interview
‘Celebrity Wheel of Fortune’ returns on ABC Sunday night
A special Bond: Daniel Craig named honorary commander in the Royal Navy
Gabourey Sidibe shares the special connection she has to her new podcast thriller ‘If I Go Missing the Witches Did It’