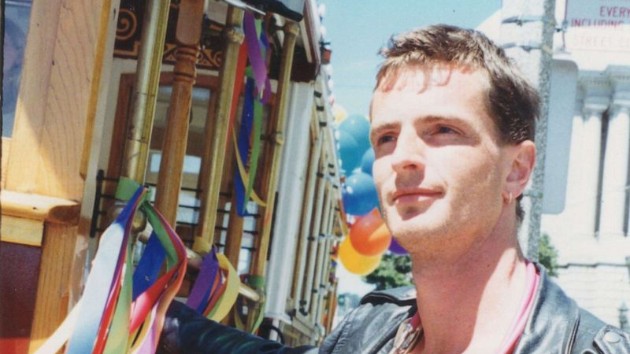 (NEW YORK) — Today, there are an estimated 1.1 million people in the U.S. living with HIV, according to the Centers for Disease Control and Prevention.With drugs such as post-exposure prophylaxis (PEP) and pre-exposure prophylaxis (PrEP) made available to help treat and prevent the spread of HIV, the number of people diagnosed with the disease has decreased. The annual number of new diagnoses declined 9 percent from 2010 to 2016 in the U.S.But the outlook wasn’t always this hopeful.”It was completely unexpected. Everybody was baffled by this,” Guy Vandenberg, who worked as a nurse helping patients with AIDS during the 1980s epidemic, told ABC News’ Good Morning America. “It was a mystery initially as to what this lethal thing was. And when you don’t know what something is, it’s extra scary.”

From unknown to epidemicIn 1981, the first cases of what would eventually become known as AIDS started to arise on the West Coast of the U.S. By 1985, there were an estimated 558,000 people diagnosed with AIDS living in the country.At the beginning, medical professionals were uncertain what caused the disease and exactly how it was spread.The uncertainty resulted in a great deal of fear. Many medical personnel refused to give care for fear of being exposed. Others felt that in order to give care, it was necessary to wear protective gear, referred to as “space suits.””The space suits originally came into existence to protect patients who were severely immunocompromised,” Vandenberg explained. “And then in some hospitals, it got turned around because health care professionals got so scared that they wanted to wear them for their protection.”At the time, the majority of AIDS patients were men who had sex with other men, leading many to believe it was a disease contained to the gay community and was often referred to as “gay cancer.””From the beginning, this was not a gay epidemic,” Vandenberg said. “Yes, there were a lot of gay men who were infected, but this virus doesn’t discriminate.”Vandenberg says the misconception led to many gay patients — regardless of being infected with the virus or not — receiving lower levels of care than other patients. Vandenberg, who himself is gay, experienced this firsthand when hospitalized in the 1980s.”The food tray was shoved into the room and everything was covered in plastic,” he said. “Then everything was put in biohazard bags when it was taken out. People were fully gowned when they came in, even just to talk with me.”

The power of touchWhile hospitals around the country were frightened of patients with the disease, San Francisco General Hospital decided to take a different approach to the care provided to AIDS patients by embracing the power of touch.In 1983, SFGH founded the world’s first in-patient AIDS ward, known as 5B. It was dedicated solely to the care for patients with HIV and AIDS, and the staff was made up of health care providers who volunteered to be there.5B stood out from other hospitals because staff treated patients like any other and were not afraid to touch them.”We knew enough to know that this wasn’t casually transmitted,” Vandenberg said. “We didn’t have the absolute certainty to back that up, but if this had been airborne or transmitted through casual contact, we would’ve seen something really different.”The recently released film 5B, produced by Verizon Media Company, shares the stories of nurses such as Vandenberg, who worked in the ward and documents how the 5B changed the way patients were cared for.Vandenberg began his nursing career in the late 1980s working with AIDS patients in hospice care, an area of the medical field where nurses are trained to care for patients with compassion. He would later take these skills to SFGH when he transferred to the AIDS ward in the early 1990s.”5B combined this approach of doing what you could to help a person survive with the approach that we had in hospice of human touch, and recognizing that there’s a human being behind all of those tubes and gadgets,” he said.”People need human touch. If they’re not accepted in society, if they’re not accepted in their family, then there’s nurses, there’s volunteers. It’s not the biological family…it’s the logical family,” Vandenberg added.

Continuing the fight against HIV/AIDSIn 1998, Vandenberg’s life would change forever when his partner, Steve Williams, became severely ill and hospitalized. Initially, Williams was tested for cancer, but would later be diagnosed with HIV.”I was angry that HIV had come so close because I had been working in it a number of years and I somehow felt that I was entitled to a reprieve or something like that,” Vandenberg said.Williams was admitted to SFGH, where he would recover from the severe illness. Now, the pair have dedicated much of their time to “paying it forward” by travelling the world to help areas that are greatly impacted by HIV and AIDS.With recent medical advancements, Vandenberg is hopeful that HIV will soon be eliminated but recognizes there is still much work to do.”On the one hand, I feel very hopeful that we now have so much that we can do,” Vandenberg said. “Medical advances are incredibly important and I’m glad that they’re happening. But with these medical advancements, we have to also make sure that they get implemented.””Don’t wait for a leader. Don’t wait for someone to show you the way,” he adds “Don’t wait for the right presidential candidate to show up. It’s you and me. It’s right now. It’s right here. You are as prepared as you need to be.”

After quitting the fashion industry, supermodel Halima Aden is back — this time, on her own terms
6-year-old boy follows mom’s instruction to leave mask on at school, wears it in school photo
Vaxxed ‘Dancing with the Stars’ pro Cheryl Burke quarantines after positive COVID-19 test
John Hinkley, who tried to assassinate Reagan, granted unconditional release
“It was a mistake of some sort”: ‘The View’ co-hosts Sunny Hostin & Ana Navarro COVID-19 negative after on-air scare
How Lee Pace got into godly shape for Apple TV+’s sci-fi epic ‘Foundation’