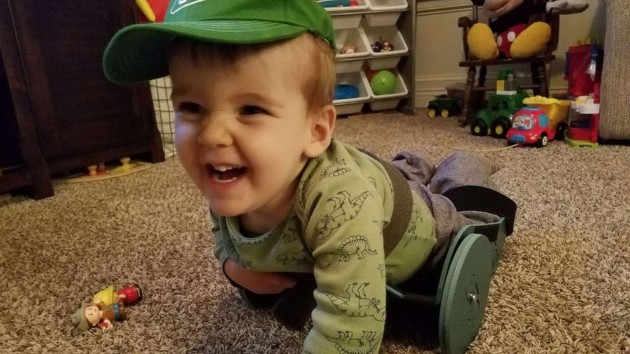 (NEW YORK) — A 2-year-old who once played in the same spot on the floor of his Missouri home is now getting into trouble like any toddler would.Brody Moreland is cruising around the house, playing with his tractor toys and chasing the family cat thanks to “the Frog” — a device created by his father. Now, Brody and his parents are helping other children across the nation by giving them the gift of mobility.”There’s toys to pick up now,” mom Ally Moreland told ABC News’ Good Morning America. “It’s exciting to watch him change. In the beginning, his cognitive development exploded as soon as he became mobile. There was a long time where I thought this wouldn’t be a reality for him.”Brody was born with spina bifida. He was diagnosed in utero when mom Ally Moreland was 20 weeks pregnant, she said.Brody spent 16 days in the NICU and received two back surgeries within a week of his birth.Later, Brody was diagnosed with a second condition called spinal cord atrophy, which limits brain signal from going below his chest.”It essentially means he’s paralyzed from the chest down,” dad Taylor Moreland told GMA.”We were devastated,” said Ally Moreland. “There was a lot of guilt and questions and worry; ‘What did I do wrong? Why did this happen to my child?"””After we knew that, we quit focusing on ‘Why?’ and began focusing on, ‘How do we help him?"” said Taylor Moreland.Taylor said his son was introduced to a scooter board last year to help him crawl around. However, Brody’s hands would get stuck underneath, making it difficult to maneuver.”I started thinking, ‘Truly I can make something better,"” Taylor recalled. “Just seeing him try to move, that sparked it. Then it was [a] relentless drive to get him crawling.”In September 2018, after lots of trial and error, “the Frog” was born.The device on wheels allows children to move around freely on their tummies by using their arms. Kids are strapped in, and the device tilts up and down to move with their bodies. It’s recommended for ages 6 months to about 5 years old, and lets kids play with other kids at the same level.Its name comes from Brody looking like “a little frog” as he crawled and teetered on the device, his mother said.Taylor Moreland has no formal education in engineering. He grew up on a farm and runs a business selling seed and crop protection products to farmers.At nights he works at his home building Frogs from foam core plastic. Taylor uses a CNC machines, or a Computer Numerical Control device, which generates prototypes from digital software files.The Morelands have now launched their own company, Frog Mobility LLC. A patent is pending and about 20 kids across the U.S. are currently using the device in addition to Brody, and there is a list of children waiting for their own Frog.”Most of the kids who have them now, have found out through our network of physical therapists or our GoFundMe page,” Taylor Moreland said. “I never thought this would be something that would help another kid.”Gerti Motavalli, Brody’s physical therapist, said she’s introduced the Frog to four children so far.”One, a little 12-month-old boy with Down syndrome. It helped him to figure out how to use his arms for crawling,” she told GMA. “The other child has a big feeding tube in her belly and was not comfortable lying on her tummy. Using padding she is able to use the Frog without pain and move around successfully. The third is a child with very little muscle strength.”Montavalli said she’s a fan of the Frog since works for all the back and shoulder muscles necessary for good posture, and can be adjusted to the level of work the child uses to move it.”I have been working for 32 years with children and there has been nothing like this on the market,” she said.The Frog currently costs $300 to make and send to a child. If a family cannot afford the Frog, the Morelands dip into their crowdfunding money to send one free of charge, they said.”The goal right now is to get kids moving,” Taylor Moreland said. “Before we had the Frog, we put him on the floor and that’s where he was going to be 30 minutes later. He can now explore and do what he wants to do.””He is very curious little boy,” said Ally Moreland. “I just love his can-do attitude. In his mind, he’s not different.”