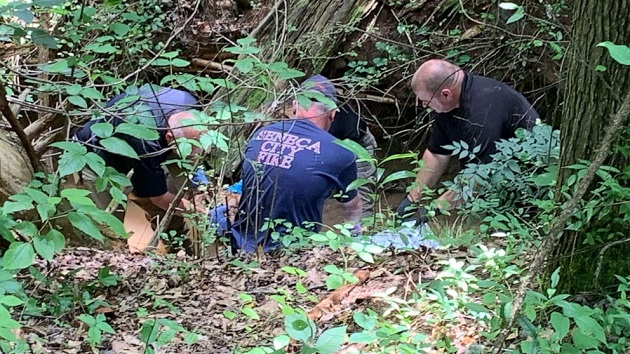 (SENECA, S.C.) — Authorities in South Carolina are seeking to identify a woman whose remains they are finding piece by piece, according to officials.The first set of remains, a right pelvic bone and a right femur, were found on June 17 after a dog discovered them and brought them to a home on Asbury Drive in Seneca, Oconee County Coroner Karl Addis told ABC News via email. Two days later, additional remains were discovered in a creek close to the home, according to a press release from the coroner’s office.On Monday, a head and upper torso were found after a team of 35 searchers combed through another tributary creek off Beech Drive in Seneca, according to a press release from the Seneca Police Department. The remains are in an advanced state of decomposition and are presumed to be associated with the body parts that were found last week, Addis said.Authorities believe the remains belong to a white woman about 5-foot-1 to 5-foot-7 in height and who was about 25 to 45 years old when she died, according to the coroner’s office.The woman likely died between a few months to a year ago, Addis said.An autopsy will be conducted on Thursday, and DNA will be collected and compared to any known missing persons from Oconee County, according to the coroner’s office.

Authorities are asking residents who live nearby to report anything suspicious they have seen or observed.Additional information was not immediately available, authorities said. Copyright © 2019, ABC Radio. All rights reserved.

Harris interview with ‘The View’ delayed after co-hosts test positive for COVID-19
A special Bond: Daniel Craig named honorary commander in the Royal Navy
A century after arson decimated its Chinatown, San Jose to apologize for past racism and injustices
After people spoke out about COVID-19 vaccines and period changes, research is underway
Billy Bob Thornton and Tania Raymonde on bringing ‘Goliath’ to a close with new fourth season
‘The Killing of Kenneth Chamberlain’ shines a light on racial injustice