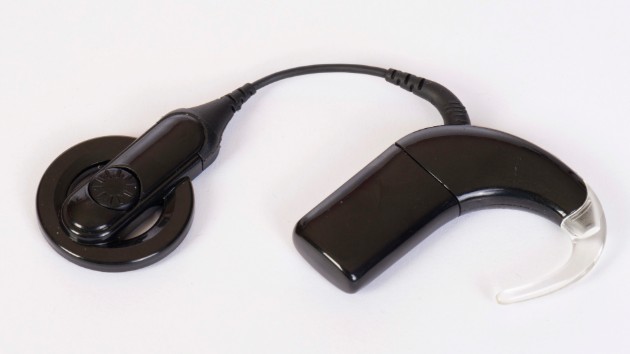 (NEW YORK) — The moment a deaf toddler heard her mother say “I love you” for the first time after getting cochlear implants was captured in an emotional video.”All the love that I know she feels, for her to hear it, I know we all felt like, thank God, she’s able to hear us,” mom Patricia Shaw said of the moment her daughter, A’deja Rivers, 1, was able to hear for the first time. “It came out in tears,” Shaw of Arcadia, Florida, said of her family’s reaction. “It was amazing for all of us.”Shaw described A’deja as “adventurous,” adding that she “likes to laugh and she likes to hug and love.”She said having her daughter, who has been deaf since birth, hear for the first time on June 20 when she got the cochlear implants was simply “a complete blessing.””It was always like, OK, the day is coming up and how is it going to feel? And it felt amazing,” she said. “To know that she heard me say, ‘I love you,’ and she might have saw my mouth moving, but the first time she heard me say it, and her eyes lit up, it was a complete blessing.”Ever since she got the cochlear implants, A’deja has been “so curious” and “so adventurous and she wants to be a part of everything,” Shaw noted.A’deja has also started enjoying music and dancing for the first time.”Now it’s like whenever she hears a song, music has a tune, she just goes a bopping. It’s like an ‘Oh my goodness’ kind of moment,” Shaw said.”We’re all very grateful and we thank god every day that she has this opportunity,” she added.Shelly Ash, an audiologist and cochlear implant team coordinator at the Johns Hopkins All Children’s Hospital in St. Petersburg, Florida, said that cochlear implant technology has come a long way since it first was introduced in the 1980s.”It works by radio frequency,” Ash explained. “It is a micro computer.””This is my 30th year in the industry so I have been so lucky to get to do this hundreds of times with babies and young children and it’s always very exciting for everyone in the room because there is so much anticipation built up,” Ash added.Ash said the technology has advanced so much over the last few years and the devices have gotten smaller in size but also more powerful.”Moms and dads are just so nervous until we actually say, ‘It’s live, and you can talk to your baby now,"” she said.Ash said she was in the room when A’deja heard for the first time.”We’re all sort of holding our breath, seeing what the baby is going to do when they hear voices,” she said. “Sometimes they cry because that’s there only form of communication, sometimes they will laugh about it because it sounds ridiculous to them.””A’deja had a great reaction,” Ash continued. “She took it all in. It was a really neat moment when we could see her awareness on her face, her eyes lighting up.””It’s just as exciting as it was in 1990 when I first got to do this with kids,” she said.

Now you can own James Bond’s DB5 — the book, that is
Ken Jennings, Mayim Bialik to host ‘Jeopardy!’ for remainder of 2021
Shannen Doherty says breast cancer is “part of life”: “I never really complain”
SpaceX successfully launches first all-civilian flight into Earth’s orbit
Fence goes up around US Capitol, as law enforcement braces for Sept. 18 protest
DOJ files for immediate injunction to halt enforcement of Texas abortion law