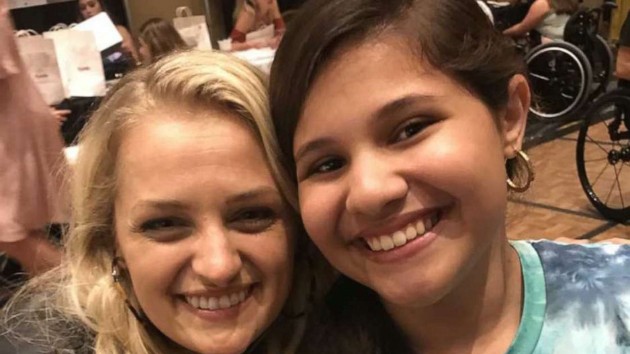 (NEW YORK) — Olivia Curcuru, 13, who loves to play wheelchair basketball, got the surprise of a lifetime: her very own custom adaptive sports wheelchair.

“It feels a little bit unreal,” Olivia said about finally getting a chair that fits her after years of trying to play basketball in borrowed ones.Paralympian gold medalist Megan Blunk surprised Olivia, who traveled to Los Angles from Scottsdale, Arizona, along with two other young athletes with their very own custom adaptive sports wheelchairs at the 2019 Angel City Games, an adaptive sports festival celebrating athletes with disabilities. The gift was made possible thanks to a donation from The Hartford’s Ability Equipped program.In 2009, at age 3, Olivia suffered a spinal cord injury after being hit by a truck while riding her tricycle. Since then, she’s been in a wheelchair, but has never let it slow her down.“My mom would tell me when I was little I would fly down the hospital hallways just zooming to my heart’s delight,” Olivia told ABC News’ Good Morning America, laughing. “She said the only time I cried was when I got blisters on my thumbs because I was rolling way too fast.”Olivia’s mother, Carolyn Curcuru, told GMA that Olivia’s love for sports came naturally, whether it was archery, swimming, dancing or basketball. In rehab, Olivia’s team of doctors suggested she focus on what she could do instead of what she couldn’t, “and we just took that to heart,” Curcuru said.At age 4, Olivia started her first sport, archery, which eventually led her to basketball.The first time she played wheelchair basketball was with Arizona Disabled Sports, a Paralympic sports club. However, the family had to drive two hours each way on a school night just for Olivia to participate. Carolyn Curcuru said they also found it difficult to find education systems that could accommodate Olivia’s physical and educational needs.Being the only child at her middle school of over 900 students who uses a wheelchair, Olivia has also struggled with balancing time between classes, medical appointments and making friends. But that is why her sports commitment was well worth it, said Curcuru, for Olivia to be able to compete and be part of a community.From the little girl being forced to watch from the sidelines, Olivia is now a player on Ability 360’s wheelchair basketball team, and many of her teammates were in attendance at the Angel City Games. Ability 360 is an organization that offers programs to help empower people with disabilities.Olivia told GMA she feels freedom on the court, and that she’s looking forward to traveling with her teammates for tournaments soon.Sports wheelchairs average about $2,500 per chair, and depending on added features can cost over $5,000, according to The Hartford. For years, Olivia used the chairs provided by different facilities, which are often too big.“Not to say she didn’t play well, but you can tell she was uncomfortable,” her mother said.Curcuru called the custom wheelchair a literal “game changer.”Paralympics Gold Medalist Megan Blunk explained that a wheelchair that doesn’t fit properly is “like wearing size 12 tennis shoes when you wear a size 7.” With a properly-fitted chair, a player can be much more agile, she said.“A lot of times kids are in chairs that don’t fit them, they’ll try dribbling and [the ball] will bounce off their wheel and everyone will say, ‘Yay, at least you’re out there.’ It’s so frustrating for me to see this because I know it’s the chair, it’s not them,” Blunk added.Blunk, who suffered a spinal cord injury herself in 2008, said wheelchair basketball was the thing that brought purpose back to her life. She wants to dispel any misconception that being in a wheelchair means you deserve pity or are destined to have a sad life.”I’m a pioneer, my role is to push through this and not give up so I can make [things] better for the next generation,” Blunk said. “It’s a beautiful thing to be able to do.”New generations like Olivia’s, have benefited from role models like Blunk and Ali Stroker, the first wheelchair user to win a Tony Award, accomplishing feats others deemed impossible for people with disabilities.“If you feel like you can’t do a certain thing, but then you see other people do it then you know you can do it too,” Olivia said.

R. Kelly accuser, documentary producer speak out after guilty verdict: ‘These women are like heroes’
Obama gives Democrats a pep talk with Biden agenda in limbo: The Note
‘Dancing with the Stars’ season 30 recap: Martin Kove knocked out of the competition
After quitting the fashion industry, supermodel Halima Aden is back — this time, on her own terms
Senate grapples with debt limit, stopgap funding with days to government shutdown
Vaxxed ‘Dancing with the Stars’ pro Cheryl Burke quarantines after positive COVID-19 test