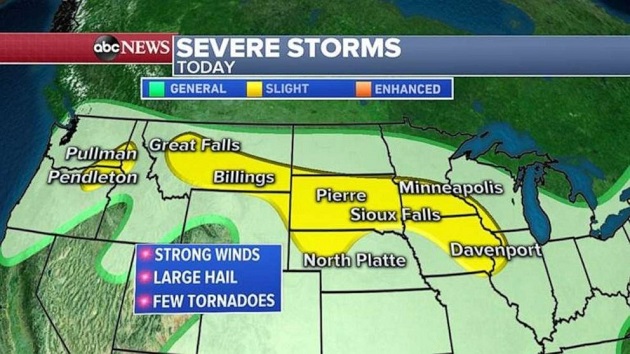 (NEW YORK) — More than 120 damaging storms were reported from Montana all the way to Florida on Tuesday, a barrage that included 70 mph winds from Texas to Illinois, golf ball-sized hail in Nebraska and up to half a foot of rain in parts of southern Iowa.In parts of southern Texas that saw a foot of rain overnight on Monday, there were disaster declarations on Tuesday as authorities rushed to provide flood relief.Storms are expected to continue on Wednesday as a new system makes its way out of the West. Severe storms could stretch from Washington state to Illinois.Damaging winds, hail and a few tornadoes are likely to be the biggest threats.Although many northern U.S. cities have had a pretty mild spring and early summer — cities including Denver, Chicago and New York have yet to hit 90 degrees — that may soon change.A full-blown heat wave — meaning at least three days with 90-degree highs — is now expected in Philadelphia and Washington as things head up along the East Coast.