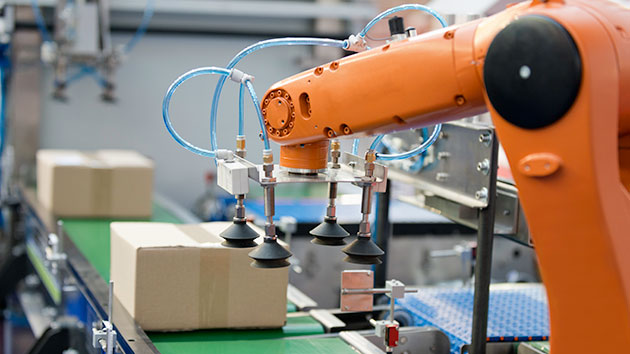 (NEW YORK) — Robots are estimated to replace about 20 million manufacturing jobs by 2030, according to a new report.The global stock of industrial robots has more than doubled since 2010, and the rise of robots has already had a “profound effect” on industrial employment around the world, according to a report released Wednesday by Oxford Economics, a global forecasting and quantitative analysis firm.Each new robot introduced into the workforce displaces 1.6 manufacturing workers on average, the reports states.China is leading the rest of the world, installing one of every three new robots that comes into the job force, according to the report.Robots are steadily gaining traction in specific segments of the service economy, such as baggage handling at airports and loading inventory in warehouses.Lower-skilled regions are at most risk from automation and could see twice as many manufacturing job losses. This could lead to growing levels of economic inequality, according to the analysis. The authors of the report cautioned that policy-makers will need to mitigate the risks of automation on employment.However, the report states that fears surrounding “global job destruction generated by robots” appear exaggerated because its study, based on the current wave of robotization, tends to boost productivity and economic growth, and generates new employment opportunities at a rate comparable to the rate of job destruction.While jobs such as warehouse work are in “imminent danger,” other positions in less structured environments “will likely be carried out by humans for decades to come,” the report states.”It will be difficult for machines to replace humans in service sector occupations that demand compassion, creativity and social intelligence,” according to the analysis. “Physical therapists, dog trainers and social workers are likely to remain secure in their jobs.”Copyright © 2019, ABC Radio. All rights reserved.