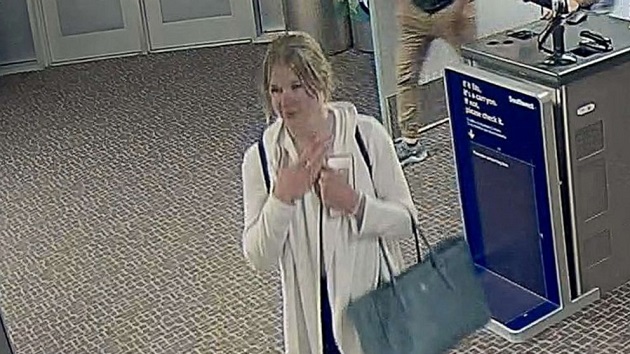 (SALT LAKE CITY) — Police on Tuesday released the last known photos of missing University of Utah student Mackenzie Lueck, who disappeared shortly after she was snapped by security cameras deplaning at the Salt Lake City International Airport.Lueck, 23, left the plane at 2:09 a.m. on June 17, and didn’t appear to talk to anyone at the airport, police said. At 2:40 a.m. she took a Lyft from Salt Lake City’s airport to Hatch Park in north Salt Lake City, police said.The Lyft driver told police that an individual met Lueck at the park and the 23-year-old did not appear to be in distress, Salt Lake City Police assistant chief Tim Doubt said.The college senior hasn’t been seen since. There’s no evidence of foul play, Doubt said, but police are concerned.”She isn’t somebody that would go off the grid and would disappear,” her friend, Juliana Cauley, told ABC News’ Good Morning America.Police are desperate to find the individual she met at the park and want that person to call police, Doubt said.”We cannot confirm the make and model of the vehicle that picked up Lueck or the description of the person at Hatch park,” Doubt said at a news conference Tuesday.The description of that person is vague and could be man or woman, Doubt said.To concerned friends like Cauley, it was odd that Lueck didn’t go straight home from the airport.”She has this cat, cute little black cat named Nova. She came back and didn’t even go by to see Nova, and that’s strange,” Cauley said. “That cat’s her best friend.”Lyft officials and the driver have spoken to police and have cooperated with the investigation, authorities said.Lueck, from Southern California, had gone home for her grandmother’s funeral, and when she landed in Salt Lake City early that morning, she texted her mother to say she had arrived safely, ABC Los Angeles station KABC-TV reported.The college senior has missed a midterm exam since she vanished, Doubt said.To Cauley, that shows “there’s something wrong. Because she’s never been one to ditch her priorities even when she’s been going through tough times.”Lueck was scheduled to fly back to California on Sunday, June 23, but wasn’t on the flight, Doubt said.”I feel very concerned and very worried,” her friend Kennedy Stoner told GMA. “It’s out of character for Kenzie to go just off the grid like this. She is very close with her family.””I would just want anyone to come forward with any information no matter how small it is,” Stoner said. “We need to find Kenzie. I’m praying everyday that she’s safe.”Doubt asked the public to come forward if they know if the college student has an alternate phone, hidden social media contacts or may be in contact with someone online.Officials at the University of Utah said they’re “deeply concerned about the well-being of Mackenzie ‘Kenzie’ Lueck and her family.””The university’s dean of students has spoken with Mackenzie’s family to offer support and to express the campus community’s shared hope for her safe return,” university offiicals said in a statement said. “The dean’s office is also talking with and providing support to Mackenzie’s classmates.”Cauley read a statement on behalf of the family at Tuesday’s news conference, urging anyone with information to call the tip line at 801-799-4420.