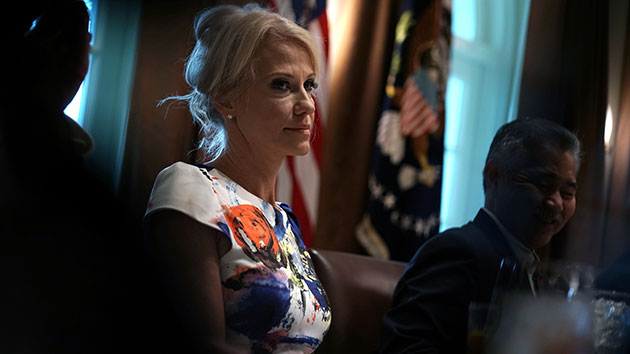 (NEW YORK) — The House Oversight Committee voted on Wednesday to authorize a subpoena for Kellyanne Conway, a top adviser to President Donald Trump, after she failed to testify about her alleged violations of the Hatch Act. A federal watchdog agency has said she should be “removed from service” for making illegal political statements. The committee had asked Conway to testify, but lawmakers were met with an empty chair after the White House notified the committee’s Democratic chairman, Rep. Elijah Cummings, that they would decline the invitation claiming senior advisers to the president are immune from congressional testimony.“The American people demand that our public officials follow the law and be held accountable for their actions,” Cummings said. “Through this resolution the committee demands answers and requires Ms. Conway to provide those answers under oath.” Cummings hasn’t officially issued the subpoena yet, but has said he fully intends to do so. Committee Republicans pushed back, arguing that the confrontation sets a dangerous precedent for all public officials. “As we start to look at this subpoena, we have one standard for Kellyanne Conway and another for everyone else,” GOP Rep. Mark Meadows said.Rep. Justin Amash of Michigan voted yes on the resolution to subpoena Conway — the only Republican to do so.In addition, Meadows and Cummings, who are friends, had a heated exchange. “I think we’ve gotten to a point where disobeying the law is okay!” Cummings snapped. Meadows shot back: This is not disobeying the law.” “Yes it is!” Cummings yelled, slamming his gavel.Copyright © 2019, ABC Radio. All rights reserved.

Louisiana residents frustrated by FEMA aid process weeks after Hurricane Ida
These vaccine mandates are already in place to attend school in the US
Confused about boosters? Here are some answers
What to expect as FDA advisory panel debates Pfizer COVID booster shots
Utah police release body camera image of Gabby Petito after apparent fight with boyfriend
Democratic drama as House advances Biden’s agenda: What’s in the draft reconciliation bill?