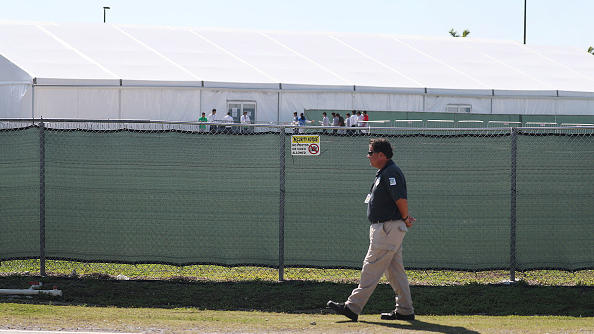 (MIAMI) — Two presidential candidates, Sens. Elizabeth Warren and Amy Klobuchar, visited a temporary holding facility for unaccompanied migrant children in Homestead, Florida, on Wednesday, hours before they were due to hit the Democratic debate stage.While neither Warren, of Massachusetts, or Klobuchar, of Minnesota, were allowed into the Homestead Temporary Shelter for Unaccompanied Children, Warren spoke outside of the facility and called the separation of families at the border a “stain on our country.”“What is happening at Homestead to children, what is happening as the direct result of the activities of the United States government, is wrong,” Warren said. She said the Trump administration’s policy was to maximize “the pain inflicted on families who flee to the United States to try to build some security and safety in their lives,” and called it “fundamentally and morally wrong.”Their visit comes amidst renewed criticism over the Trump administration’s treatment of children crossing into the country along the southern border. The outcry has has taken on fresh urgency in recent days, as a harrowing image circulated that showed a man and his 23-month-old child lying lifeless and face down in the mud, with the girl’s arm draped over her father’s body. Authorities say that the two drowned as the attempted to cross from Mexico into the United States.Ahead of the debate on Thursday, which will feature the second half of presidential candidates, Sen. Bernie Sanders of Vermont, former Rep. Beto O’Rourke Of Texas, Rep. Tulsi Gabbard of Hawaii, and New York Mayor Bill de Blasio say they will all visit Homestead.Sens. Kamala Harris of California and Kirsten Gillibrand of New York, South Bend Mayor Pete Buttigieg, former Secretary of HUD Julian Castro, former Colorado Governor John Hickenlooper and Marianne Williamson, a spiritual guru, and author, are scheduled to be there Friday.Another candidate, Rep. Eric Swalwell of California, visited the facility Monday.Both Warren and Klobuchar missed the Senate’s vote on a $4.6 billion border security bill Wednesday that passed overwhelmingly in the Republican-controlled body, and would send emergency humanitarian relief to the southern border, but is markedly different from a bill passed by the Democrat-controlled House. Klobuchar told ABC News that she wants to work with both the House and the Senate for comprehensive immigration reform. The White House has vowed to veto the House version.As of June 16, some 2,450 unaccompanied children between the ages of 13 and 17 were being held at the Homestead facility, according to a fact sheet by the Department of Health and Human Services.

Nearly 28,000 pounds of frozen pizza recalled due to misbranding, undeclared allergens
Facebook is ‘pausing’ development of Instagram Kids amid mounting backlash
“It was a mistake of some sort”: ‘The View’ co-hosts Sunny Hostin & Ana Navarro COVID-19 negative after on-air scare
How Lee Pace got into godly shape for Apple TV+’s sci-fi epic ‘Foundation’
Netflix’s ‘TUDUM’ global fan events provides peeks of returning favorites and new series and films
Legacy and landscape at stake for Pelosi, Biden: The Note