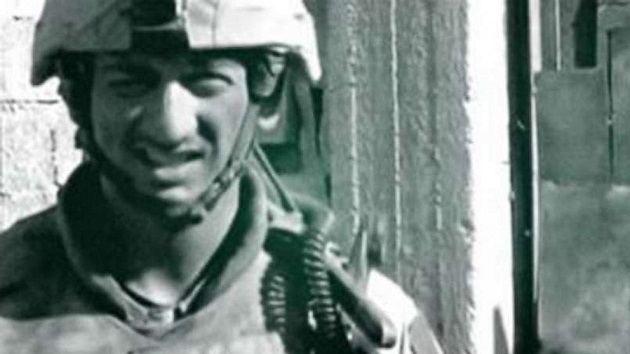 (WASHINGTON) — Army Staff Sgt. David G. Bellavia will become the first living Medal of Honor recipient for the Iraq War when President Donald Trump presents the award at a White House ceremony on Tuesday, fifteen years after his acts of heroism in the city of Fallujah in 2004. The five previous Medals of Honor for the Iraq War were handed out posthumously.Bellavia, now 45, is being honored for his heroism on Nov. 10, 2004 when he was a squad leader in Operation Phantom Fury, an American offensive on the western Iraqi city of Fallujah, an Iraqi insurgent stronghold. The operation is also known as the Second Battle of Fallujah.The Army veteran, then a member of Alpha Company, 2nd Battalion, 2nd Infantry Regiment, 3rd Brigade Combat Team, is credited with saving his entire squad that day after being pinned down by enemy fire coming from a block of houses.”He quickly exchanged an M16 rifle for an M249 Squad Automatic Weapon, entered the house where his squad was trapped, and engaged insurgents, providing cover fire so that he and his fellow soldiers could exit safely,” according to a White House statement announcing his award earlier this month.One of those soldiers pinned down by the enemy was Sgt. 1st Class Colin Fitts — now retired — who briefed reporters beside Bellavia at the Pentagon on Monday.”Were it not for David Bellavia, I wouldn’t be sitting here today. So I’m extremely humbled and very appreciative for him,” Fitts said. “[Bellavia] put himself in the line of that fire and laid down a base of fire — overwhelmed the enemy long enough for me to get myself and the members of my squad out.”When an armored Bradley Fighting Vehicle could not fire directly into the house, Bellavia re-entered the house — armed only with an M16 — and attacked the insurgents who had been firing rocket-propelled grenades.”He proceeded to kill one insurgent and wound another, who then ran to another part of the house,” the statement said. “Then-Staff Sergeant Bellavia was soon engaged by another insurgent rushing down the stairs when the previously wounded insurgent reemerged to engage him as well.”Bellavia was able to return fire and killed both of those attackers. When he took fire from an insurgent who appeared from a closet across the room, he pursued that individual up the stairs and killed him.His award is an upgrade from the Silver Star he had previously received for these same actions. A few years ago, the Pentagon began a blanket review of all valor awards to see if they should be upgraded. Bellavia was unaware that his Silver Star had been chosen for the Medal of Honor until he received a phone call from the president, he said.”The Iraq War veteran has served and surpassed, at times, the highest standards of American warrior tradition among any generation,” Bellavia told reporters on Monday. “We have nothing to apologize for. We serve our country. We do what our leaders tell us to do.””The narrative on the Iraq War has long been written,” he continued. “I’m not here to change anyone’s mind. I’m here to tell you that there are men and women who served our country in Iraq, and it has made me — it is one of the honors of my life.” He now wants to encourage others to serve.”There’s a million and five reasons why we’re divided in this country. I never cared what your skin color was, who you worshiped or who you loved. If you are willing to get shot at for me, for my buddies, I will follow you. I will lead you anywhere,” Bellavia said, adding, “I want to be of service to that Army.”He said that after reuniting with his battle buddies after 15 years there was “so much love.””I never thought I’d see love on a battlefield. It’s horrible, it’s ghastly, it’s ghoulish,” Bellavia said. “But you see people doing things for each other that you’d never see in any other circumstance and it is a sight to see. It will change your life forever. I think we’re all better for seeing that love displayed in combat.”Bellavia grew up as the youngest of four boys in Lyndonville, New York. He enlisted in the Army as an infantryman in 1999 and would deploy to Kosovo and then Iraq just four years later in support of Operation Iraqi Freedom.Between February 2004 and February 2005, his task force participated in battles in Najaf, Mosul, Baqubah, Muqdadiyah and Fallujah.After leaving the Army in 2005, Bellavia co-founded Vets for Freedom, a veteran advocacy organization with tens of thousands of members who were veterans from the wars in Iraq and Afghanistan.He returned to Iraq in 2006 and 2008 as an embedded reporter, covering the fighting in Ramadi, Fallujah and Diyala Province. His 2007 book, House to House, detailed his experiences in Fallujah.Bellavia is a business owner in western New York. He has three children.Copyright © 2019, ABC Radio. All rights reserved.