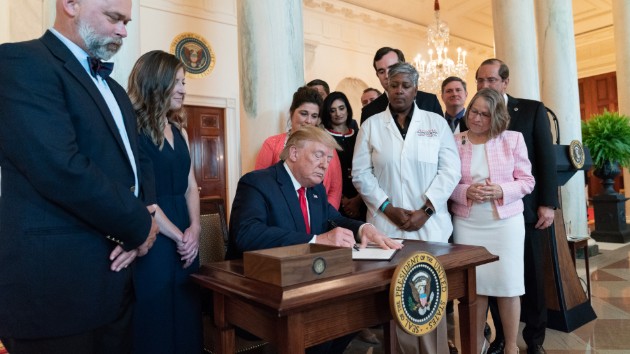 (WASHINGTON) — President Donald Trump signed an executive order on Monday aimed at curbing health care costs by requiring health insurers and providers to reveal pricing for care to patients. He said it would “blow everything away” in the health care industry. “This is bigger than anything we’ve done in this particular realm,” Trump said at a signing ceremony at the White House. “It’s pretty much going to blow everything away.””Often, prices differ drastically between providers and hospitals for the exact same services. And there is no consistency. There is no predictability. And there’s frankly no rhyme or reason to what’s been happening for so many years,” Trump said.The order, “Improving Price and Quality Transparency in Healthcare,” does not immediately make changes to America’s health care system, but creates rules that will require hospitals to disclose the prices patients and insurers actually pay and require the Department of Health and Human Services to put forward a proposal to provide patients with information about potential out-of-pocket costs they will face before they receive services. It also calls for dramatic expansion of access to claims data and directs the Treasury Department to expand the range of services for which patient Health Savings Account dollars can be used.On a call with reporters, HHS Secretary Alex Azar touted the executive order as “one of the most significant steps in the long history of American health care reform.”Azar talked about his own experience with trying to figure out the cost of a routine echo-cardiogram procedure that he was going to have back in his home state of Indiana.”So there I was, the former deputy of Heath and Human Services, and that was the kind of effort it took to find out the cost of a very standardized or routine procedure. What if I had been a grandmother or a 20-something with a high-deductible health plan? This is the kind of experience that no American should ever have, and it’s the kind of thing President Trump is intent on making as rare as possible in American healthcare?” Azar said.Advocates for the executive order say that it will help patients understand potential costs for procedures so that they can make better decisions about their heath care, but critics say that that it will only create more red tape and may even end up driving up heath care costs as competition prices are revealed.”Everyone deserves affordable coverage, and we share the Administration’s commitment to making health care more affordable for every American,” said Matt Eyles, president and CEO of America’s Health Insurance Plans, in a statement. “We also agree that patients should have accurate, real-time information about costs so they can make the best, most informed decisions about their care. But publicly disclosing competitively negotiated, proprietary rates will reduce competition and push prices higher — not lower — for consumers, patients, and taxpayers.””It sounds simple to reveal prices to a government agency that then would make them available to the public. But the infrastructure and paperwork to implement this will become a new Washington swamp,” former Rep. Ernest Istook, R-Okla., and president of Americans for Less Regulation wrote in an op-ed.With health care a top issue for 2020 candidates, the president has said he plans to roll out a brand new health care plan and his administration has issued incremental federal fixes.”Obamacare has been a disaster,” Trump said in an interview with ABC News Chief Anchor George Stephanopoulos. “We’re going to have a plan. That’s subject to winning the House, Senate and presidency, which hopefully we’ll win all three. We’ll have phenomenal health care.”Lowering costs for care has bipartisan support on Capitol Hill but is seen as a weak spot for Republicans in the next election. As a result of Trump’s poor polling on health care, Politico reported that the Democratic group American Bridge is reportedly spending $50 million to target potential 2020 voters.Still, the president took a jab at Democrats in Congress and singled out 2020 contender Sen. Bernie Sanders, I-Vt., and Democrats’ support for single-payer health care calling it “very dangerous.”Trump, who has long been teasing a major executive order on health care, said he thinks this will “be one of the biggest things ever done in this world, in this industry and in this profession.”It’s unclear if this is the executive order that he has been teasing for months.