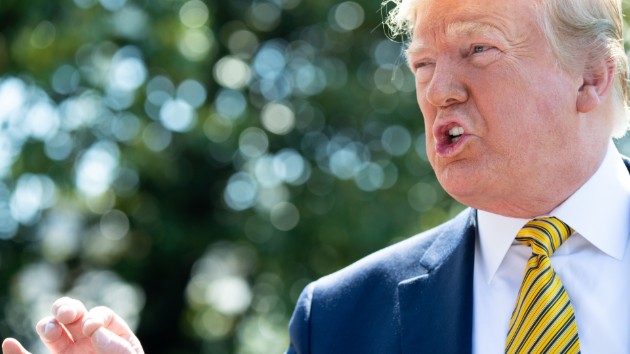 (WASHINGTON) — President Donald Trump fired back at a woman who accused him of sexual assault saying “she’s not my type” and insisting the incident “never happened.” The accusation is the latest in a string of allegations against the president dating back decades, all of which he has denied. In response, E. Jean Carroll, who made the latest accusation, could only laugh. The writer, who said Donald Trump sexually assaulted her in the mid-1990s, told Anderson Cooper in an interview Monday night: “I love that. I am so glad I’m not his type. I’m so glad.”Earlier in the day, the president, who also said Carroll was “totally lying” that he sexually assaulted her, told The Hill during an interview in the Oval Office: “I’ll say it with great respect: No. 1, she’s not my type. No. 2, it never happened. It never happened, OK?”Carroll had repeated the accusation a few hours earlier during a TV interview.In the later interview with Cooper, in addition to laughing off Trump’s denial, Carroll said the president’s response felt quite similar to others when confronted by other women. “He’s denied all 15 women who have come forward. He denies. He turns it around. He threatens, and he attacks,” Carroll said on CNN.Trump on Monday repeated the claim he’d never met Carroll, whose account of the alleged incident was published on Friday by New York Magazine in an excerpt of her forthcoming book. That excerpt included a photograph from 1987 showing Trump, his then-wife Ivanka, Carroll and Carroll’s then-husband, John Johnson, at a party. “Totally lying. I don’t know anything about her,” Trump had said. “I know nothing about this woman. I know nothing about her. She is — it’s just a terrible thing that people can make statements like that.” Trump told reporters the photo didn’t prove anything. “Standing with a coat in a line — give me a break — with my back to the camera,” he added. “I have no idea who she is.”Copyright © 2019, ABC Radio. All rights reserved.