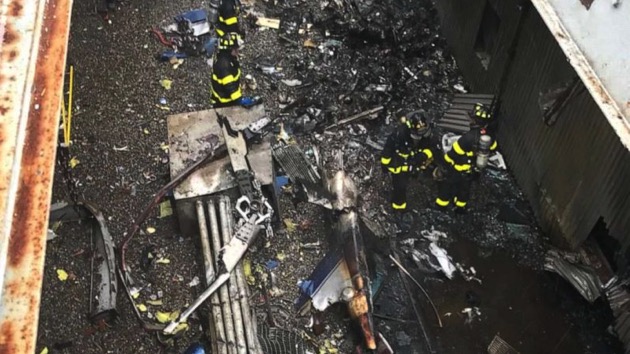 (NEW YORK) — A pilot who crashed on top of a New York City high rise building was lost and flying in and out of clouds just before the accident, according to a preliminary report from the National Transportation Safety Board (NTSB).Tim McCormack was killed after he conducted a hard landing on top of the Midtown building on the afternoon on June 10. The crash filled the air with smoke and clogged nearby streets with firetrucks.McCormack did not have an instrument rating and did not report anything mechanically wrong with the aircraft, which was severely damaged in the crash, according to the report.McCormack had first dropped off a passenger at a heliport on 34th street in New York City after taking off from Westchester County, Doug Brazy, an NTSB air safety investigator, told reporters the day after the crash.He then waited and reviewed the weather before leaving the heliport to head to Linden, New Jersey, Brazy said.Before the fatal flight, McCormack mentioned to staff at the heliport that due to weather he had a 20 minute window “to make it out,” according to records from the Federal Aviation Administration (FAA). After taking off, he made a request to return to the heliport about five to seven minutes after departure because he “did not know where he was,” records show.Video recorded by a witness showed the helicopter flying erratically in and out of clouds over Manhattan and the East River before the crash, according to the records.While over the East River, McCormack changed course and altitude several times before making a 270-degree turn back toward Manhattan, the report states.The crash occurred inside an area of Manhattan with flight restrictions that require pilots to obtain permission from air traffic control to enter, according to the FAA. McCormack was not in contact with air traffic control, nor was he required to be for his flight plan, according to the NTSB.McCormack was the only one on board the Agusta A109E. No one else was injured in the accident.He decided to crash onto the roof of the high-rise building on 7th Avenue between 51st and 52nd Streets to put “other lives first,” his family said in a statement after the crash.Copyright © 2019, ABC Radio. All rights reserved.

Tyra Banks defends Olivia Jade ahead of her ‘Dancing with the Stars’ debut: “Olivia is so brave”
Murdaugh murders and mysteries timeline: Key events in the South Carolina family’s scandals and deaths
Alaska once had the highest vaccination rate. Now it’s in a COVID-19 crisis.
In theaters now: Gerard Butler and Frank Grillo in the “irreverent, explosive” ‘COPSHOP’
‘Ted Lasso’? ‘WandaVision’? ‘Mare of Easttown’? Who will clean up on Sunday’s Emmy night?
Jennifer Aniston says season 2 of ‘The Morning Show’ ﻿will tackle cancel culture