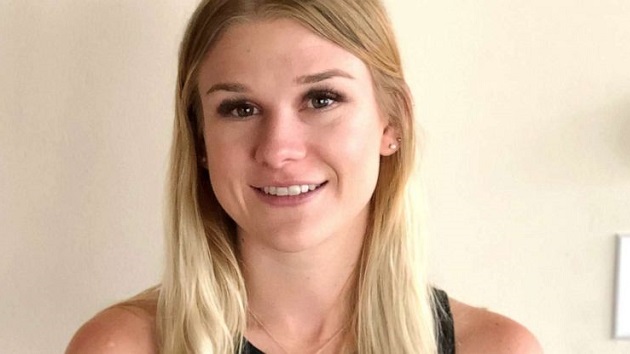 (SALT LAKE CITY) — One week after a University of Utah senior mysteriously vanished, police say she was last seen when her Lyft driver dropped her off at a Salt Lake City park. At 2:42 a.m on June 17, Mackenzie Lueck, 23, took a Lyft from Salt Lake City’s airport to Hatch Park in north Salt Lake City, Salt Lake City Police assistant chief Tim Doubt said at a news conference Monday.The Lyft driver told police that an individual met Lueck at the park and the 23-year-old did not appear to be in distress, Doubt said.No information has led police to believe she was harmed, Doubt said.Lyft officials and the driver have spoken to police and have cooperated with the investigation, authorities said.Lueck, from Southern California, had gone home for her grandmother’s funeral, and when she landed in Salt Lake City early that morning, she texted her mother to say she had arrived safely, ABC Los Angeles station KABC-TV reported.The family reported her missing on Thursday afternoon, said police.The college senior has missed a midterm exam, Doubt said. She was scheduled to fly to Los Angeles on Sunday, June 23, but wasn’t on the flight, Doubt said.”The University of Utah is deeply concerned about the well-being of Mackenzie ‘Kenzie’ Lueck and her family,” university officials said in a statement. “Mackenzie is enrolled part-time as a senior and is majoring in kinesiology and pre-nursing and minoring in health. She has been enrolled since fall 2014.”The university is cooperating with the police, according to the school statement.”The university’s dean of students has spoken with Mackenzie’s family to offer support and to express the campus community’s shared hope for her safe return,” the statement said. “The dean’s office is also talking with and providing support to Mackenzie’s classmates.”Doubt called this case a “high priority” for the department and ask anyone with information to call the tip line at 801-799-4420.

‘We are prepared’: Law enforcement stresses readiness ahead of right-wing rally
Angela Bassett is amazed by her Madame Tussauds wax figure: “Oh Lord! I’m a twin!”
Statue of Bitcoin founder honors mysterious ‘god’ of cryptocurrency
Tyra Banks defends Olivia Jade ahead of her ‘Dancing with the Stars’ debut: “Olivia is so brave”
‘Ted Lasso’? ‘WandaVision’? ‘Mare of Easttown’? Who will clean up on Sunday’s Emmy night?
Jennifer Aniston says season 2 of ‘The Morning Show’ ﻿will tackle cancel culture