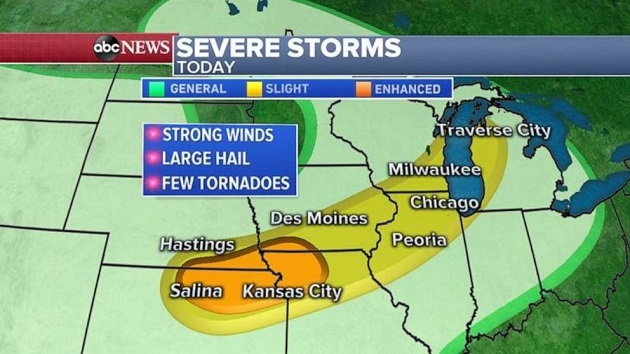 (NEW YORK) — Among the almost 200 damaging storms reported from Texas all the way to Pennsylvania over the last 24 hours were four tornadoes — two in Texas and two in West Virginia. Damage also was reported in Atlanta where wind gusts of up to 60 mph were reported. Thousands were without power. The Houston metro area on Monday saw 3 inches of rain in about an hour, flooding streets and roads, and requiring water rescues.Strong but not severe thunderstorms are targeting the Northeast, including Philadelphia and New York, on Tuesday.A new storm system and a cold front is heading for the Midwest and Great Lakes. Severe storms there could produce damaging winds, hail and a few tornadoes.Major cities on Tuesday that may see storms include Kansas City, Milwaukee and Chicago.Copyright © 2019, ABC Radio. All rights reserved.