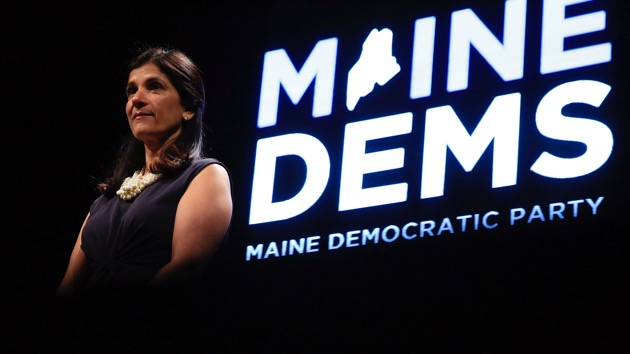 (WASHINGTON) — Maine Sen. Susan Collins, the lone Republican in Congress who represents a New England state, is gearing up for what might be her toughest Senate race since being elected in 1996.Maine House Speaker Sara Gideon announced her candidacy for the 2020 Senate Democratic primary Monday. She will be up against state House lobbyist Betsey Sweet and lawyer Bre Kidman for the Democratic nomination.”Susan Collins has been in the Senate for 22 years,” Gideon says in a video announcement. “At one point, maybe she was different than some of the other folks in Washington, but she doesn’t seem that way anymore.”

I’m running against Susan Collins for U.S. Senate because Mainers deserve a senator who will always put our state first. Let's build this campaign together. Will you join us? ➡️ https://t.co/mcihP9UtNE #MESen #MEpolitics pic.twitter.com/1SbV0MbMKM

This is a key Senate seat Democrats are hoping to flip within a swing state that has voted for a Democratic presidential candidate in the last three races. Hilary Clinton carried the state in 2018 with 48 percent of the vote to President Donald Trump’s 45 percent.Ever since Collins, who has been considered a more moderate Republican due to her stance on abortion rights, cast a pivotal vote that helped send Brett Kavanaugh to the Supreme Court, her moderate stance has been under question and Democrats have vowed to defeat her.Gideon in her announcement video highlighted Collins’ voting record to attack her reputation as a moderate Republican, citing her vote in favor of Trump’s $1.5 million tax cut and her Kavanaugh vote.”Susan Collins’ vote to put Brett Kavanaugh on the Supreme Court may be paying off for her, but it’s put women’s control over their own health care decisions in extreme jeopardy,” Gideon said.This 2020 Senate race is set to see big money from both in-state and out-of-state donations; even the announcement video features a clip of Senate Majority Leader Mitch McConell saying Collins will be “well-funded” in her race.Whoever wins the Democratic nomination to challenge Collins will be starting off with millions of dollars in the bank.Prior to Collins announcing her support for the nomination of Kavanaugh, three organizations — the Maine People’s Alliance, Mainers for Accountable Leadership and Ady Barkan’s Be a Hero PAC — started a crowdfunding campaign to raise money towards a future potential opponent if she were to vote in favor of Kavanaugh, which she eventually did. The campaign raised over $4 million for her eventual opponent, the fundraising site shows.But Collins raised her highest amount of quarterly donations in her career — $1.8 million — following her Kavanaugh vote in the last quarter of 2018. She saw another $1.5 million in contributions in the first quarter of 2019, federal campaign financing forms show.This will also be the first time Collins is facing a primary challenger since first being elected 22 years ago. Derek Lavasseur, a pro-Trump Republican, is challenging her for the party’s nomination.The primary vote will be held next June, with the nominees facing each other in the general election in November.Copyright © 2019, ABC Radio. All rights reserved.

Democratic drama as House advances Biden’s agenda: What’s in the draft reconciliation bill?
Ken Jennings, Mayim Bialik to host ‘Jeopardy!’ for remainder of 2021
Fence goes up around US Capitol, as law enforcement braces for Sept. 18 protest
Run or Walk for Someone Special this Sunday
DOJ files for immediate injunction to halt enforcement of Texas abortion law
Wendy Williams tests positive for COVID-19; ‘The Lion King’ celebrates its return to Broadway; and more