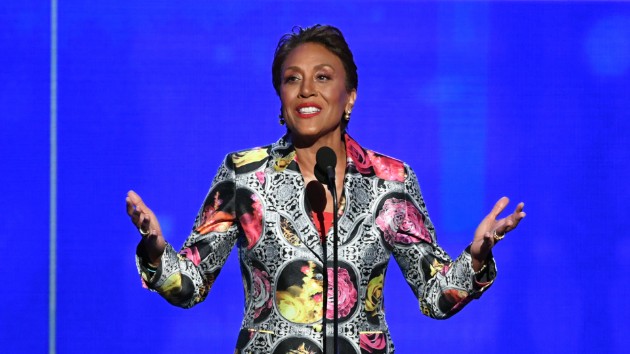 (NEW YORK) — ABC News’ Good Morning America anchor Robin Roberts took home the Sager Strong Award at Monday’s nights NBA Awards and delivered an inspiring message. “We are all stronger than we think we are,” said Roberts, who describes herself as a “thriver” after living through both breast cancer and Myelodysplastic Syndrome (MDS).The Sager Strong Award is named after sideline reporter Craig Sager, who died in 2016 at age 65 due to leukemia. Roberts, a former college basketball player and ESPN anchor, is the third recipient of the award. It is presented each year to an “individual who has been a trailblazer while exemplifying courage, faith, compassion and grace,” according to the NBA.WNBA star Candace Parker and actress Issa Rae presented the award to Roberts, who received a blazer that is a replica of the one worn by Sager when he accepted the Jimmy V Perseverance Award at the 2016 ESPYs.”I’m honored and I’m grateful for this recognition,” Roberts said. “Courage, faith, compassion and grace are a perfect description of Craig Sager. The only time that I am at a loss for words when it comes to Craig … his wardrobe. I cannot wait to wear this on the air.” “I’ll wear it proudly,” she added.Roberts also talked about Sager’s courage, citing his “unwavering faith” and noting that his compassion and grace are qualities “we should all strive for in our lives.”Backstage, Roberts got emotional about the honor, saying she doesn’t “take awards lightly.” “I’m just a little girl who grew up in Mississippi,” she said. “I know my mom and dad, they just wanted their children to be respected. They wanted us to work hard and earn whatever came our way.”Shaquille O’Neal, the host of this year’s NBA Awards, also praised Roberts, who has used her experience with MDS to become an advocate for bone marrow donation. “She’s never given up, and every time she comes back, she come back younger looking,” O’Neal said.

‘Moulin Rouge! The Musical’ ﻿and ﻿’A Christmas Carol’ ﻿win big at 74th annual Tony Awards
Tony nominee Katori Hall shares what she’ll do with her award if she wins on Sunday night
America Strong: Immigrant-founded nonprofit provides laptops, tech to students in need
50 Cent and Snoop Dogg slam Emmy Awards for lack of Black winners
America Strong: Teachers across the country go above and beyond as in-person classes return
‘The Crown,’ ‘The Queen’s Gambit,’ ‘Ted Lasso’ win big at the 73rd Emmy Awards